The Hot Hype and Cold Reality of Cryotherapy. Does it Freeze Your Pains Away? 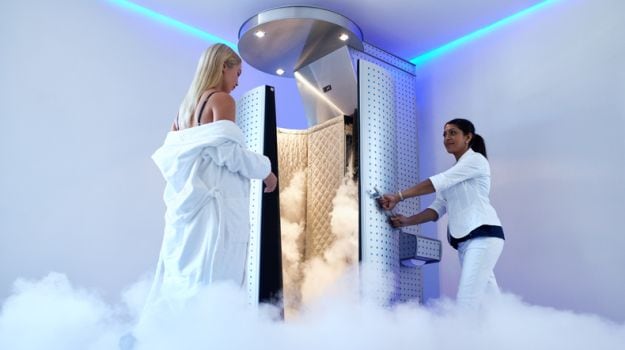 Highlights
A new ice age is here. And it's making amazing promises of pain-free joints and sculpted abs.
Cryotherapy - a freezing treatment turned piping-hot health trend - is being hyped by spas across the country, many of which sprang up within the last year.

The problem: There's no solid scientific evidence to back any of it up. And the Federal Drug Administration is warning spas to stop making such claims.

There's actually very little research on cryotherapy at all. "The evidence is lacking for me to say yes, it's effective, or no, it's not effective," says Joseph Costello, a lecturer in exercise physiology at the University of Portsmouth, in England, who wrote a much-cited review of all the available research on whole body cryotherapy last year.

That isn't stopping untold thousands from lining up every week to follow the likes of LeBron James, Tony Robbins and sundry celebrities and "Real Housewives" into cylindrical cryotherapy chambers, where they get blasted from the neck down with abominably cold air.

What does cryotherapy do, exactly? Advocates like to say that the cold air forces blood to your core, tricking the body into thinking it's experiencing hypothermia. From there, the claims get a bit fuzzy. Whole body cryotherapy believers say it acts as a super-charged ice bath, allowing muscles and tendons to more quickly recover from heavy training or pain, reducing inflammation. And many just claim, in the most unscientific of terms, that they feel energized by the treatment.

To find out what it feels like, I visited DistrictCryo, a new Washington, D.C., spa, for a three-minute session with air pouring in at - 215 degrees Fahrenheit (mine was a "warmer" treatment; the air temperature can drop to - 275 degrees). I wore socks, slippers and gloves they gave me (men are also asked to keep their briefs on) and a robe, which I removed and handed over once I was entombed in the chamber. Moments in, there was a burning sensation on my forearms - minor perspiration turning to ice? - that disappeared within seconds. It felt unnaturally cold, as it should, since the air dropped well below earthly temperatures (the lowest ever recorded at ground level is −128.6 °F).

My teeth chattered, I shivered; it was unpleasant but not intolerable. And afterward, I experienced a giddy surge of endorphins that lifted me for about an hour.

But I couldn't discern whether any of it was caused by the cryotherapy or my own nerves, jangled from the peculiar experience. The minor sense of euphoria was similar to how I felt after surviving a particularly rough airplane landing a few weeks earlier. Was it cold-induced "vasodilation," as cryo-experts would tell you, or just adrenaline-fueled relief?

Following the oversize claims made by some cryotherapy providers - and after the death of one person in a cryotherapy chamber last year - the FDA issued a strongly worded warning against whole body cryotherapy in July. "[C]onsumers may incorrectly believe that the FDA has cleared or approved [whole body cryotherapy] devices as safe and effective to treat medical conditions," Aron Yustein, a medical officer in the FDA's Center for Devices and Radiological Health, said in the FDA release. "That is not the case."

The FDA recently released letters it sent to two California cryotherapy businesses advising them that the health claims they were making about cryotherapy "may be considered false and misleading." Deborah Kotz, an FDA spokeswoman, said that, beyond warning letters and recalls, the FDA can take "further enforcement action to protect public health including conducting and coordinating criminal investigations."

The allure of cold therapies has been around for a long time. The Greeks promoted cold baths as a healthy tonic; the Romans celebrated in their Frigidariums. Charles Darwin swore by a daily cold shower. But whole body cryotherapy was specifically developed in 1978 by a physician, Toshima Yamauchi, as an experimental way to treat rheumatoid arthritis. By the 1990s, it began to become popular in various European spas as an alternative treatment for chronic pain.

It started drawing public attention here in 2011, when U.S. athletes followed the lead of UK soccer teams and embraced it as a restorative, post-competition therapy. The Dallas Mavericks regularly frequented cryotherapy chambers during their run to their first NBA championship and - notoriously - U.S. sprinter Justin Gatlin went to the world championships complaining of frostbitten feet caused, he claimed, by a wearing damp socks in a cryotherapy chamber.

Cryotherapy spread to the celebrity set, with Jennifer Aniston, Daniel Craig and Jessica Alba reportedly booking appointments. Tony Robbins told fellow self-help and lifestyle guru Timothy Ferriss on his podcast that cryotherapy's effects on him were "mind-boggling," gave him "an explosion of endorphins" and said he'd purchased a unit for his home and for his mother-in-law, who suffered from arthritis.

All that Hollywood sizzle slowed last year after 24-year-old Chelsea Ake-Salvacion was found dead in a cryotherapy unit in the Las Vegas area spa where she worked. An autopsy later ruled that she had suffocated. She might have lost consciousness when she ducked her head down into the unit, possibly to retrieve her cell phone, and succumbed to the liquid-nitrogen-cooled air.
"If it lets you drop your head six inches and you die, something is wrong there," said Richard Harris, a lawyer representing Ake-Salvacion's family. He said he was "on the verge" of filing a suit against the manufacturer, distributor and spa. Ake-Salvacion had closed the shop and was alone when she died, and Harris believes the units should have safety features preventing them from being operated alone (which some now do).

But if that tragedy cooled cryotherapy's hype, it didn't last.

One of the major US distributors of cryotherapy units, Impact Cryotherapy from Atlanta, says sales have continued to soar. Impact announced in July it had sales of 200 units since the company launched in June 2014, but "we've probably bumped over 250 now," he said this month. Another major distributor, CryoUSA out of Dallas, lists more than 200 places it has sold cryotherapy units in the past five years.

After my cryotherapy session, my skin felt slightly chapped for a few days, and I experienced neither the deep sleep nor heightened awareness that advocates speak evocatively about. I asked the University of Portsmouth's Costello, who had said he tried out the treatment multiple times, how he responds to it.

But Kenneth Knight, a retired professor of exercise sciences at Brigham Young, says cold is good. Knight studied the impact of cryotherapy for more than 40 years, since he wrote his doctorate on the subject. ("He literally wrote the book on cryotherapy," Costello says.)

His basic belief is that when we injure ourselves, our bodies tend to overreact with pain. "My premise is that the cold knocks out pain, and lets a person starts exercising," he says.

For Matt Bellina a 33-year-old father of two boys who was diagnosed with ALS five years ago, whole body cryotherapy has become a daily - sometimes twice daily - ritual for the past six months at the Newtown Athletic Club, in Newton, Pennsylvania.

ALS, a nervous system disorder that destroys nerve cells in the brain and spinal column, slowly attacks a patient's ability to use and control muscles. He says that cryotherapy has been "by far the most effective treatment."

"It's definitely not a cure, but it's definitely helping. I'm in a lot less pain, I'm sleeping better at night, I have a lot more energy," Bellina said.

The ALS makes keeping up with his two sons, ages 3 and 5, a challenge - "My hands kind of suck, and I trip a lot." - and early this year, his condition seemed to be getting rapidly worse. "I had been in a downhill slide."

Promoted
Listen to the latest songs, only on JioSaavn.com
But he believes the cryotherapy has helped "level things out." And he says his doctor cautiously endorses his sessions - "if I think it's helping."