The Secret of the Mediterranean Diet? There is no Secret 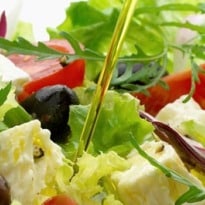 Researchers claim that nitro fatty acids, formed when olive oil and vegetables are eaten together, are the key to the healthy Mediterranean diet. But such a reductionist approach to food and health is unhelpful

Whoop-de-doo, researchers at King's College London and the University of California claim to have identified the "secret" underpinning the oft-quoted healthfulness of the Mediterranean diet. From their lab tests on mice (not just any old mice, genetically modified ones) they conclude that when olive oil and vegetables are eaten together, they form nitro fatty acids that help lower blood pressure - a risk factor for heart disease - by blocking the enzyme epoxide hydrolase.

The lead researcher, Professor Philip Eaton, describes the chemical reaction of oil and vegetable as "nature's protective mechanism", and sees a commercial future in it. "If we can tap into this we could make new drugs for treating high blood pressure and preventing heart disease." Nitro fatty acids could soon be touted as the next pharmaceutical preventative for cardiovascular disease. Pills aside, though, if nitro fatty acids are indeed the magic formula on which the healthy Mediterranean diet is predicated, should we be conducting our own personal diet experiments to take on board this revelation?

Initially, the more holistic notion that health and slimness lies in combining food groups, rather than fixating on an ever-changing procession of "superfoods", has its attractions - not least because few of us lick our lips at the prospect of eating a bucketload of kale, or can afford to breakfast daily on chia seeds and blueberries. Combining salads and vegetables with oil is hardly onerous, but can this double act really be the holy grail of heart health?

Cynicism is surely merited. This study was part-funded by the British Heart Foundation, a body that finds itself on a sticky wicket because its rote script - the oft-quoted "lipid hypothesis" that eating fat causes heart disease - has gone into meltdown like a defrosting fridge. In nitro fatty acids, the BHF has a way to explain the apparent anomaly that a Mediterranean diet is healthy, even though it contains its dietary villain.

Bear in mind that the BHF, along with other charities and the public health establishment, has evangelised a selectively edited, much traduced, some might say mythical account of the Mediterranean diet. The longevity of Mediterranean populations, we were assured, was explained by their high consumption of fruit and vegetables (true), and low consumption of red meat and saturated fat (false).

In fact, no sentient visitor to southern Europe could fail to notice the reliance on fatty lamb, full-fat yoghurt and cheese (feta, mozzarella, manchego, pecorino), kebabs and slow-cooked red meat dishes, such as the Greek beef stifado. Even vegetables come stuffed with red meat. Yes, monounsaturated olive oil is the default oil of the Mediterranean region, but a serious amount of saturated fat is eaten too.

Modern perceptions of the Mediterranean diet stem from observation of dietary traditions in Crete, Greece, and southern Italy in the 1960s, when people were physically active, spent lots of time outdoors and ate shared communal meals of fresh, seasonal, homecooked, locally produced foods. That's not the same thing as bolting down a huge plate of pasta in a cook-in sauce, followed by a high-sugar, reduced-fat yoghurt, while watching MasterChef on the settee.

NHS Choices actively encourages us to "make our diets more Mediterranean" by, among other things, "eating more bread and pasta" (studiously ignoring the growing body of evidence that implicates refined carbohydrates in obesity) and telling us, somewhat inarticulately, to eat "more fruit and salad, including tomatoes and vegetables". But this reheated, rehashed "Mediterranean" diet increasingly looks like a lazy student's essay cobbled together from out-of-date textbooks.

Can there really only be one global prescription for life-sustaining eating? What about Japanese people? They are some of the slimmest, healthiest, longest-lived people on the planet, and their diet is not Mediterranean. Might there be something to explore there? All that fermented food, micronutrient-packed seaweed, low sugar and, last but not least, the appreciation of beef marbled with a high percentage of intramuscular fat?

Comparing European countries, it is becoming obvious that obesity is more prevalent in laissez-faire markets - notably the UK and Ireland - where a light regulatory touch allows powerful multinational food companies to maximise profit by encouraging children and adults to overconsume their highly processed, nutritionally compromised products.

The debate around what really constitutes healthy eating is heated and continuing. We may not know yet with great certainty what is good for us, but using our own powers of observation, it is crystal clear what is bad for us: a diet of processed, industrialised junk food.

The chemical reaction of oil and vegetable is said to be 'nature's protective mechanism'. Photograph: Ian O'Leary/Getty Images