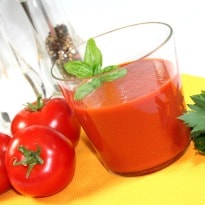 Move over green tea and probiotics, there's a new nutritional ingredient in town. A product made from ripe tomato extract that claims to promote improved blood flow important for a healthy heart and cardiovascular system will be showcased at Vitafoods Asia, a major trade show in Hong Kong.

The developers of Fruitflow, a concentrated tomato extract in syrup form, claim the product inhibits platelets from clumping and aggregating, a known cause of heart attacks, stroke and venous thrombosis.

Platelets are important for normal blood clotting after an injury and circulate in the blood as smooth, disc-shaped structures. But factors like smoking, obesity, stress and raised cholesterol can cause the cells to become spiky and form dangerous, unwanted blood clots that clog arteries and lead to heart disease and strokes.

A 2006 study published in The American Journal of Clinical Nutrition and led by Provexis, which holds the patent for the formula, also found significant reductions in the build-up of platelets as soon as three hours after consumption.

Similarly, researchers in Japan found a nutrient in tomatoes that could tackle the onset of vascular disease. The study, published in the journal Molecular Nutrition & Food Research this year, identified a compound that enhanced fatty acid oxidation, which can lead to the development of vascular diseases.

Fruitflow is the first ingredient of its kind to receive an approved health claim from the European Food Safety Authority and could become the latest superingredient to infiltrate the functional foods market currently dominated by products with added probiotics, green tea, and vitamin D.

Promoted
Listen to the latest songs, only on JioSaavn.com
The concentrated extract is water soluble, fat and protein-free, and easy to mask in foods and beverages, the company claims. It's also stable with a long shelf life and commercially ready to be added in a range of food, beverage and dietary supplement formats.
Researchers claim the product works immediately and requires daily consumption to maintain the health benefits.

The company is also working to add more health claims such as protection against deep vein thrombosis, metabolic syndrome and Type 2 diabetes.

Comments Other sessions at the trade show include seminars on the vitamin D renaissance, probiotics and the powers of the cranberry.