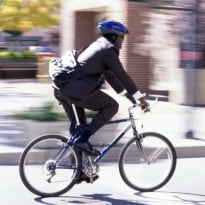 Ditch the car and switch to walking or cycling says a new study that was published in the journal 'Preventive Medicine'.

According to the study, the overall wellbeing of people considerably improved after they changed their mode of travel to the workplace from driving to walking or cycling. The physical activity before office helped improve concentration and lowered stress levels. The study was conducted by health economists at the University of East Anglia and the Centre for Diet and Activity Research (CEDAR) who found that travelling using public transport is better for people's psychological wellbeing than driving.

Adam Martin, lead researcher from UEA's Norwich Medical School, said "One surprising finding was that commuters reported feeling better when travelling by public transport, compared to driving. You might think that things like disruption to services or crowds of commuters might have been a cause of considerable stress."

He added, "But as buses or trains also give people time to relax, read, socialise, and there is usually an associated walk to the bus stop or railway station, it appears to cheer people up."

The research team studied 18 years of data on almost 18,000 people between the age group of 18 to 65 years in Britain. The data allowed them to look at multiple aspects of psychological health including feelings of worthlessness, unhappiness, sleepless nights, and being unable to face problems. The researchers also accounted for numerous factors known to affect wellbeing, including income, having children, moving house or job, and relationship changes.

The study also shows commute time to be important. Martin elaborates on this by adding. "Our study shows that the longer people spend commuting in cars, the worse their psychological wellbeing. And correspondingly, people feel better when they have a longer walk to work."