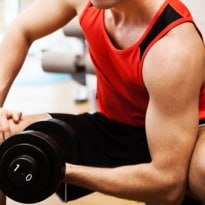 Science has found an answer to why frequent drinkers tend to lose muscle strength. Mitochondria - organelles that produce the energy needed for muscle, brain, and every other cell in the body - stop self repair in both long-time alcoholics and patients with mitochondrial disease resulting in muscle weakness, a study says.

This is because "alcohol can have a specific effect on one gene involved in mitochondrial fusion", said lead author Gyorgy Hajnoczky from Pennsylvania-based Thomas Jefferson University.

In a healthy individual, mitochondria repair their broken components by fusing with other mitochondria and exchanging their contents. An inkling that fusion might be important for the normal muscle function came from the research conducted on two mitochondrial diseases.

"A common symptom of the both diseases is muscle weakness and patients with both these diseases carry a mutation in one of the three genes involved in mitochondrial fusion," said first author Veronica Eisner, a post-doctoral fellow at Thomas Jefferson University.

To investigate whether mitochondria in the muscle could indeed fuse to regenerate, Eisner created a system to tag the mitochondria in skeletal muscle of rats. The results showed for the first time that mitochondrial fusion occurs in muscle cells, Eisner informed.

Promoted
Listen to the latest songs, only on JioSaavn.com
The research showed that of the mitofusin (Mfn) fusion proteins, Mfn1 was most important in skeletal muscle cells. Once they had identified Mfn1, they were able to test whether mitochondrial fusion was the culprit in other examples of muscle weakness, such as alcoholism.

One long-term symptom of alcoholism is the loss of muscle strength. "We found that Mfn1 abundance went down as much as 50 percent in rats on a regular alcohol diet. The decrease was coupled with a massive decrease in mitochondrial fusion," Hajnoczky noted.