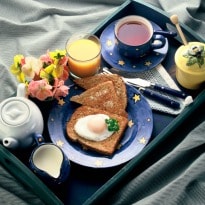 A British study has found children as young as 10 being unhappy for their weight. Since they feel they need to shed weight, one in six teenagers is skipping their morning meals.

According to a report by the Schools Health Education Unit (SHEU), nearly two-thirds of 14 and 15-year-old girls (those in Year 10) saying they would like to be slimmer. One in five of the group have no lunch along with 14 per cent of 13-year-old girls.

The study indicates that young people become more concerned about their weight as they grow up and are increasingly likely to skip breakfast or lunch as they get older, Daily Mail reported.

The research, though, found boys were less concerned about how much they weigh.

The report also questioned pupils about their eating habits.

Around one in six (17 per cent) 14 and 15-year-old girls, and more than one in 10 (11 per cent) boys of the same age did not eat breakfast -- around double the numbers of Year 6 pupils who skipped this meal. Others only had a drink for breakfast.

Laura Sharp, a nutritionist for the Children's Food Trust, said: "These are very worrying findings - all pupils, whatever their age, need to start the day with breakfast if they're going to be able to focus in class..."

"... and research shows a clear link between eating breakfast and children's attainment at school."

Comments "What's particularly worrying is that girls and boys are skipping meals at a time when their bodies are changing fast and they're particularly in need of good nourishment," she added.