The 10 Best Pints at the Great British Beer Festival 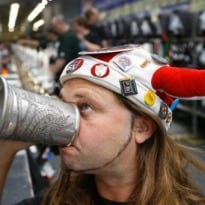 Of the hundreds of beer on offer at this year's Olympia event, here are our 10 favourites. Nominate your preferred ales below..

Next time someone says British beer is warm and flat, throw a pint in their face. Although it would be a dreadful waste of delicious cask ale, consider it an investment in the UK's pubs, because if we all bought one extra pint a month it would apparently push the whole of the beer industry back into much-needed growth.

Tens of thousands of real ale fans will have been heading to the Great British beer festival at London's Olympia this week, it's on until Saturday 17 August and you can get an idea of the scale of the thing here. Look out for the following beers among the 800 or so on offer at the festival. And for those of you who can't make it, many of them are available in pubs around the UK, in bottles, at some of the better supermarkets, and online.

Champion Beer of Scotland with good reason, Fyne Ales Jarl (3.8%), an Argyll-brewed low ABV delight is made with trendy US hop citra. It has an aroma of geraniums that wine would kill for and is mouth-puckeringly hoppy in the best possible way. Zesty lemon flavours beg you to drink it with a plate of sea bass or other white fish.

Another modern pint from the lower end of the ABV spectrum is Moor Beer Revival (3.8%). Brewed in Somerset by an American it's a standard-bearer for the new wave of British craft ale . Expect a refreshing, lively brew with a citrus character, which comes from different hops each year but always takes the best of the season. The beer is naturally hazy because of its vegetarian credentials - it is unfined and so does not have any isinglass (made from fish guts) in it.

Bragging Rights (5%), from Brains in Cardiff shows how the bigger breweries are starting to take their own bite of the craft beer pie. Give it to people who say they don't like beer. It's flavoured with honey and spices as well as hops, which could be a dog's breakfast if you got it wrong, but here is just right. Delicate honey flavours marry with cloves in a light, dry beer that seems to owe more to Belgium than Wales.

Staying Celtic, St Austell's Big Job (7.2%) may have a name like a juvenile joke but that's the only thing to snigger over. It's the hop-stuffed big brother of the brewery's standard IPA Proper Job, and boasts that it has been made with Cornish barley, despite owing its flavour to hops from across the pond.

To see how the Americans do it, try a drop of Sierra Nevada Torpedo Extra IPA (7.2%). Available in cask at the festival (quite a rarity for US beers) and regularly in bottle in the UK it may smell like grapefruit and nettles but doesn't sting you when you drink it. It's actually a very well-balanced combination of resinous US hops with sweet almost barley sugar flavoured malts.

If you want a good old pint of proper British bitter though, forget the big names and head to the south-west for Dorset Brewing Company's Dorset Knob (3.9%). It's named after the traditional Dorset biscuit rather than being a childish gag and is British session ale at its best - refreshing with a gentle hop bitterness, a malty backbone and a little voice crying out for a ploughman's lunch.

A different kind of British bitter, with a fruitcake richness, is Hook Norton's Old Hooky (4.6%) from Oxfordshire. This rich chestnut-coloured brew is a step up from a session beer with deeper flavours to match.

Next, no silly names just a useful description. O'Hanlon's Port Stout (4.8%) is brewed in Devon by O'Hanlon's and is a stout with port in it. A classic bitter-flavoured stout, it's as black as night and wows you with subtle port flavours from its added ingredient.

It doesn't sound British but Courage Imperial Russian Stout (10%) is brewed by Wells & Young's in Bedfordshire. It's a rich, viscous brew with stunning chocolate and coffee flavours and is a fantastic example of this beer style. Only brewed once a year, it's a limited-edition treat available in short daily slots at the festival but also in bottles. Whichever you opt for find a quiet spot to contemplate how wonderful it is while you imbibe.

If it hadn't been judged by beer-lovers you might think Elland 1872 Porter (6.5%) was crowned champion beer of Britain for its wine-like qualities but this West Yorkshire brew was also the winter champion. Unless you hate coffee you'll be drawn by its aroma of roasted beans and then further stimulated by bitter chocolate flavours. Make it your last beer of the night because its richness leaves you somewhat unable to taste much else afterwards.