The 10 Best Value Restaurants in Britain 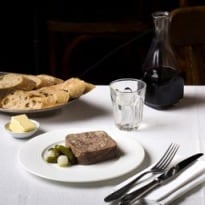 From fish and chips in Yorkshire to a blow-out at Le Gavroche, Jay Rayner picks food that offers the best value to suit any budget

In an age when it's possible to get a box of chips and three deep-fried wings from a chicken shop for 99p, it barely needs saying that cheap is not the same as good. It probably is worth saying, however, that cheap is also not always the same as good value. Of course, value can be in the eye of the beholder. It's all about what you regard as a good return for the money spent. And it's all about how much money you have to spend in the first place. If a best restaurant list is a cue for a row, a best value restaurant list is that same row squared.

So let me set the terms for this very personal, completely unranked list of great value eating opportunities. Some really are cheap. The pho at Cafe East in Surrey Quays, the roast meats at New Sum Ye in Birmingham, come in at less than a tenner.

Others cost much more but should still be classed as great value. To access them, however, you have to be flexible. If you want to experience Le Gavroche, you will have to skive off work and go there at lunchtime. Is it worth it for the full experience at a third of the cost? Yes. This applies to many big-ticket places. Most restaurants make their big money in the evenings, but need a bit of footfall during the day to keep the lights on. So do some research. Plan ahead. Save up. You may have other tips for great value eating opportunities in Britain; these are mine.

The menu at the whitewashed Magpie Cafe in Whitby is long. There are at least 32 starters, and the same number of mains. You can have most of the ingredients anyway you want them; there are even signs on the wall telling you which fishing boat landed the langoustine on offer that day. What's hilarious about all this is that all those people who queue out the door of the 70-year-old Magpie go there for one thing: fish and chips. Rightly so, because it's about as good as it gets. Even the small portion of golden battered cod and chips brings something the size of a Venetian gondola for £9.95. As they point out, these are Yorkshire portions.

Cafe East is a modest Vietnamese cafe in a grim Surrey Quays car park. Inside it's not much of a looker either: refectory tables, white walls. What matters is the menu of steaming bowls of bright, fragrant pho, the Vietnamese national dish, made with a beef tendon stock of uncommon depth, rice noodles, frondy, green herbs and lots of zing. This food feels good for you, and at £7.50 a bowl for that pho, won't require a mortgage.

Look up as you stride into the cavernous basement space that is Brasserie Zédel, just off Piccadilly Circus, and you might assume they'd had King Midas in to do the painting and decorating. Certainly it doesn't look like the place for a bargain, but that's exactly what it is. Brasserie Zédel is a loving take on the classic Parisian brasserie from Jeremy King and Chris Corbin, the men behind the flashy Wolseley. But this is a volume operation which, doing more than 1,000 covers a day, manages to keep prices down for quality by-the-book French food. How about £2.25 for the pumpkin soup? Or £3.25 for the celeriac remoulade? Best of all is the three-course prix fixe at £11.75 for carrot crudites, followed by steak haché and chips with pepper sauce and a pear tart to finish. All that and the ceiling too. It's a gift to the capital.

The Dogs, located in a high-ceilinged Georgian townhouse on Edinburgh's Hanover Street, is the sort of place any city needs: a restaurant that manages to be a bit smart in the evenings and a bit elbows-on-the-table by day. Restaurateur Dave Ramsden knows the city, and caters exceptionally well for his flock, some of whom do not have deep pockets but want both quality and a place to linger. The day menu from 12 until 4 includes a big soup at £4.50, kedgeree at £6.45, and a chicken and tarragon pie at £6.95. If you decide to go mad and have dessert, try the semolina and winter berry pudding with meringue for £3.95.

Eat two-Michelin-starred chef Michael Caines' food at Gidleigh Park in Devon - the mothership where he made his name - and you won't see change from £100 a head. Which makes the lunchtime deal at the Manchester branch of the Abode hotel chain, where Caines runs the sleek restaurant, an absolute steal. It's £14.50 for two courses, or £19.50 for three, for food that never feels like the bargain basement option. The menu might include a perfectly made chicken terrine, with crisp chicken skin and a caesar salad, lamb breast with a tagine puree, grilled vegetables and couscous and a dark-chocolate and passion fruit fondant to finish. The non‑meat options - a spring salad of broccoli and artichokes, a lavender baked onion tart fine - are none too shabby either. They also offer a wine flight, which probably works out at even better value: a different glass with all three courses comes in at £32.50. It is cooking of the highest order and the lowest price.

With outposts of Wahaca and Brindisa arriving soon, the food scene in Brixton has become politicised of late. Then again it has always been thus. Brixton is a complex neighbourhood. The development of small, relatively cheap restaurants in the two covered markets - Brixton Village and Market Row - is simultaneously regarded as a great thing for the area and a blight, dragging in too many moneyed outsiders and ramping up rents.

Many claim it isn't what it once was. I'm not sure it was ever what they say it once was. Regardless, it remains home to some terrific good-value eating opportunities: try the fresh Beijing dumplings at Mama Lan's, at £4.50 a pop. There's Kaosarn's super spicy Bangkok-style noodle soup at £7.90, or a sizable portion of the addictive chilli chicken wings at The Joint, yours for £3.50. There's Honest Burger, which, although prices have increased, still delivers good value, and the original Franco Manca where their wood-fired tomato, mozzarella and basil pizza is just £5.90. There's Wings and Tings, Etta's Seafood, The Elephant ... Go explore.

The restaurant at Bristol's renovated Lido has a wood-fired oven and, boy, are they going to use it. Most ingredients on the Mediterranean-inspired menu spend a bit of time in there. General prices are not high for ingredients and cooking of this quality.

But there are also real bargains. The set menu at lunch and early evening offers two courses for £16 and three for £20 and doesn't stint on ingredients: it could include scallops, venison and hake. There's also a very appealing tapas menu with most dishes at between £3 and £6.50. All this plus you get to watch people exert themselves in the pool while you eat.

No one would ever call Le Gavroche cheap. At night the cooking, served in the green and red dining room with every formal bell and whistle, can swiftly sprint past the £100 a head mark, for Michel Roux Jr classics such as the soufflé suisse or grilled dover sole on the bone with langoustines. But at lunchtime it harbours a secret: the all-inclusive "business lunch menu". This isn't merely three courses of grand French cooking - pork rillettes, followed by steak with red wine sauce or roasted guinea fowl with creamed polenta - but canapes, petits fours and half a bottle of both mineral water and wine. Given the size and depth of the Gavroche cellar, assembled by Michel's dad Albert, it is always very good wine. The price: £54 a head. Throw in a tip and it's £120 for two all in. No, not cheap, but extraordinary value for what you get, which really is the full Gavroche experience. Certainly it's worth taking the day off for.

Birmingham's Chinatown is small but perfectly formed. There are only three or four Cantonese cafes on the small precinct across from the Bullring but many agree the best is New Sum Ye. It's not a looker: think wipe-down tables, and blaring TV screens. There is a longer menu but the Cantonese roasts really are the point. Order up a plate of their three roast meats - lacquered duck, crisp skinned pork belly and bright red char sui - on a pillow of rice with a little bok choi and you'll be happy. And have change from a tenner.

The Green Man and French Horn on St Martin's Lane, part of the small group that includes Terroirs, Brawn and Soif, takes its inspiration from the Loire river, from the undulating Ardeche to the seafood at Saint Nazaire. Most of the dishes are well priced, but none more so than those on the pre-theatre menu, which actually runs from noon to 7pm. Two courses are £14.50 and three are £16.50. Start with artery-hardening rillettes with the crunch of cornichon. Follow that with coarse ground, shouty sausages on a bed of lentils, or a Breton galette of eggs and chanterelles. Finish with crepes with salted butter caramel. As with the whole group they take their wines seriously, and there's always an intriguing choice by the glass at great prices.