What's on the Menu? 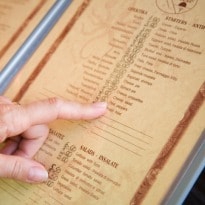 It's the first thing that we look at after taking our seats in a restaurant. It teases us, confuses us and prompts us to try new things. But how much thought goes into designing a menu? Anjana Vaswani talks to restaurateurs and designers to unearth the method behind the madness.

When 60 year-old Englishman Carl Weininger ran up a tab of £ 22,000, (close to R19 lakhs), on a Frozen Haute Chocolate last December, hunger had nothing to do with it. He admitted he had the dish, which boasted of an 23 karat edible gold and a two carat diamond garnish and was announced as the world's most expensive dessert by Guinness World Records, presuming it would lift his spirits.

While Weininger's extravagance is shocking, the fact that a restaurant -- in this case New York eatery Serendipity 3 -- would introduce a dish like that is even more curious. Immersed in a project in Houston when we contacted him, Gregg Rapp, American menu engineer and restaurant consultant explained, "Introducing such items shakes up the consumer's decision process. It's all about having some fun with your menu." (Pics/ Satyajit Desai)
Gadgets and Gimmickry

Rather than introducing such exorbitantly priced dishes, Indian restaurateurs, however, like to have their dose of fun by making their menus look quirky. Neville Vazifdar, director of Royal China, explains that was the idea when his restaurant introduced iPad menus over a year and a half ago. "The iPad had just been launched and we felt customers would enjoy the gadget, as it was something they hadn't seen before." Also, the images helped people to try out new items. "Earlier most people would order the usual fare, but once they could see what other dishes looked like, they were willing to experiment." "It's important to give customers as much or as little information as they'd like before they order and iPads are a great way to do this," Rapp says. However, he adds that some guests don't like to see a menu at all. Television personality Mini Mathur falls into this category of diners. The mother of two, who frequently dines out with her husband and kids, says, "When we head to a place, we order at least two of our favourite items for which we don't even consult a menu." But ideally, Mathur says, her family prefers to head to Moshe's at Cuffe Parade, Indigo at Colaba or Pali Village Café in Bandra, "where the menus are well balanced and there is something for everyone."


Minimalism is the Key.

There are some eateries, which believe in the ideology that less is more and prefer to keep it simple. For example, Irish House has wooden menus with funny one-liners. Similar inscriptions adorn the wall. "A menu communicates your brand so we wanted to make it fun and quirky," says Dina Shah, a marketing professional who has coordinated the menu replete with doodles and couplets for Cafe by the Beach. "Market research and food trials are also part of putting together a menu," Shah adds

Top chef Rahul Akerkar likes to keep the menus of his restaurants simple too. While the covers are usually styled by a designer, he personally chooses the font, phrasing and layout. He explains, "The way a menu reads can tempt you or put you off. If your menu is minimalist then the customer may expect the cuisine to be avant-garde." No wonder the menus of his restaurants -- Indigo, Indigo Deli, Neel and Tote on the Turf -- are inscribed in clear typeface and have a description that is not only easy to understand but interesting enough to tempt the palate. The covers are either leather or card; a choice that he tells us is simply rooted in practicality. "You want a cover that is durable and can withstand wear and tear."


The Menu is the Mirror.

Akerkar, however, believes that a restaurant's ambiance and table setting make the first impression on customers while the menu follows later. "A menu tells the customer what to expect and how the dining experience will be. But this is where many restaurants falter. They'll have a cool sounding menu, but the food won't live up to expectations." So how does one decide what goes on a menu and what stays off? Divya Thakur, creative head of graphic design studio, Design Temple, believes, "The key ingredients of a menu -- the naming of dishes, the style of description, the ingredients, the wine pairing, the presence or absence of pricing -- help convey the restaurant's identity, style and nature of food."

Explaining the intricacies of how a menu is designed, Thakur says, "For the menu of Neel, the Indian restaurant at Tote on the Turf, we began with a simple yet modern rendition of the logo in Hindi. The owners (Rahul and Malini Akerkar) and I were keen to reflect the integrity of Indian food. We chose indigo blue for the font as the restaurant is largely white and a burst of blue adds to the environment.

Thakur is also proud of the menu she designed for Southern Spice, at Taj Coromandel, Chennai. "For Southern Spice we developed a logo inspired by the banana leaf, and a script that alludes to its origins. The entire range of menus is inscribed on cloth with a gold linear border inspired by South Indian saris."

From my hearth to your heart.
Suhas Awchat, proprietor of Dakshin Culture Curry, the South Indian bar and restaurant at Shivaji Park, admits, "Our award-winning menu (which even retails for Rs 1,362 as memorabilia) is an unabashed attempt to transport diners into the world of South Indian cinema." He credits producer R Mohan for the restaurant's design and menu in 2002. The menu not only has South Indian megastars such as Rajinikanth, Kamal Haasan, Chiranjeevi and Mammootty urging you to have Appam and Chemeen Mangacharu (king prawns in a mango and coconut milk gravy) but even Awchat and his wife Deepa occupy one page dressed in filmi attire and share their success story.

Food and restaurant consultant Nidhi Behl, of Tout de Suite Culinary Solutions, says that a personal touch is crucial in order to make customers feel that restaurant owners are reaching out to them. But trying to infuse it in a menu can be tricky, she explains. Thakur couldn't agree more. She says, "There should be a certain nostalgia value in the menu. But it shouldn't be superficial. A menu should be as personal to a chef as possible. If he doesn't "feel" for or really connect with what he's putting on the plate, chances are the food won't have soul."

Rapp believes it's also important for chefs to point out what makes their dish different and share anecdotes with customers that have triggered their own happiness. "This will help them connect to your memories," he adds. Deepti Dadlani, Brand, Marketing and Communications professional, deGustibus Hospitality, which handles Akerkar's restaurants, says, "Indigo's menu features a recipe by Rahul's grandmother because he was really close to her. Signature dishes are kept because one is proud of them."

No fine print please.
Food enthusiast Kunal Vijaykar admits that he usually tries out an ancestral recipe or a chef's recommendation. But he confesses that most Indian menus leave much to be desired in terms of design. He complains that often the font is too small. "I don't want to have to pull my glasses down to the tip of my nose to read what's on the menu. Dim lighting is another pet peeve." However, the die-hard foodie admits that he is ready to overlook these shortcomings, if he gets to enjoy outstanding food. "Ultimately, I don't care if the menu's chalked out on a blackboard as long as what it offered is exciting," he adds.

Come back, baby!
Rapp, however, affirms that right from the service to the ambiance, cuisine, tariff and menu design, everything must work together to generate complete satisfaction for the customer. "A restaurant needs to create an experience so the guest feels the value and will return."

CommentsMeanwhile, Behl emphasises that while consistent quality will bring the client back for more, revamped menus also play a crucial role. "The culinary horizon of the Indian consumer has expanded tremendously, and if they want to retain their clientele, restaurateurs must keep reinventing their menus." Reiterating the point, Thakur says, "When a restaurant's menu stays unchanged for a long time, it's probably because it has struck a chord with the customers. But tastes keep changing with time, so a restaurant should alter its menu at regular intervals."