A video of an elderly Kanji Bada seller in Agra, Uttar Pradesh has gone viral. This comes just a few days after the 'Baba Ka Dhaba' video. 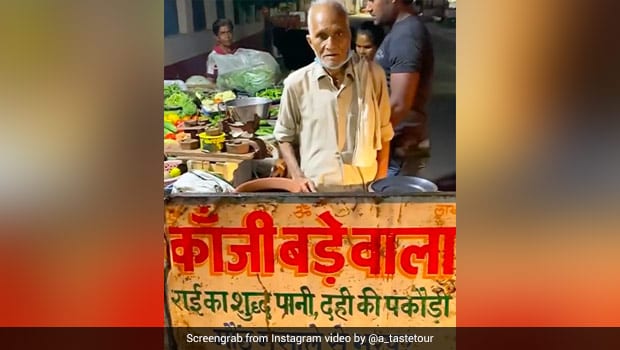 A video of a Kanji Bada seller in Agra has got netizens' support.

Social media can be put to positive and constructive use, and the past week is testimony to this. Netizens recently came out to support an elderly couple running a local food stall in South Delhi by the name of Baba Ka Dhaba. The 80-year-olds had been losing customers due to the pandemic, and were not being able to earn a living. The heartfelt video showing their stall had gone viral on the internet. Another similar video has surfaced on the internet featuring a 90-year-old Kanji Bada seller based in Agra. Take a look:

The Kanji Bada seller video was posted on Instagram by food blogger Dhanishtha who goes by the username @a_tastetour. The video she shared went viral on Instagram, garnering over 306k views. It soon made its way to Twitter as well where it amassed over one million views and counting.

The blogger wrote in the video caption about the elderly man, Narayan Singh, who has been running the stall in Agra's Kamla Nagar area for decades now. "He has been selling kanji badas for almost 40 years and as of today, he is 90 years old. Because of this pandemic he gets to earn only Rs. 250-300 in a day." She further appealed to locals to drop by and support his venture in during these testing times.

The video had the desired effect on people, who shared the details further in order to gain maximum support for the stall. People came forward in large numbers and bought the Kanji Bada from the stall. Celebrities such as Parineeti Chopra and Swara Bhasker also did their bit by sharing the video of the Kanji Bada seller. Take a look:

So here its a new step to come forward to him also the new baba is there, go agra go now its agra walo its your time to show #BabaKaDhaba#BabaKaOnlineDhaba#BabaKaDhabhapic.twitter.com/YnMdLhgY0r

Promoted
Listen to the latest songs, only on JioSaavn.com
— priyanshi jaiswal (@priyanshihere) October 9, 2020

After Delhi's Baba ka dhaba, another video of a street side vendor "kanji Vada wala" in Agra surfaced on social media. @OfficeOfDMAgra along with other local residents came out in support. ????????#sundayvibespic.twitter.com/Lp2HSqltxA

We hope netizens will come forward to support more such local street vendors in future as well. What did you think of the video? Tell us in the comments below!