Anushka Sharma recently shared a short video of Virat Kohli trying to measure his portion of Poha before consuming it. 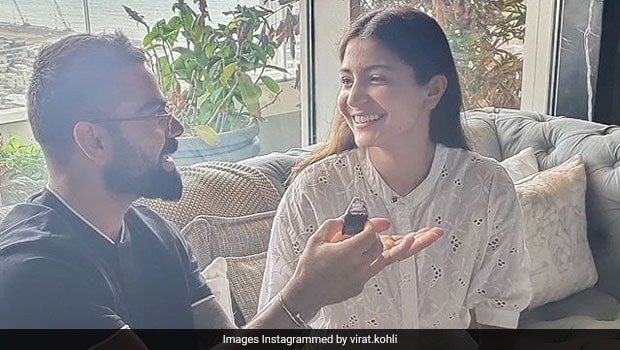 Anushka Sharma and Virat Kohli had some foodie fun.

Anushka Sharma and Virat Kohli regularly share snippets of their lives on Instagram. Whether it is videos of the duo working out, simply spending some time together or even Anushka Sharma giving a haircut to Virat Kohli - these endearing slices of their everyday tasks are a pleasure to watch. The power couple were recently seen in a short video wherein Virat Kohli was trying to measure his portion of Poha before consuming it. Take a look at the Instagram story that Anushka Sharma shared-

(Also Read: Anushka Sharma's Morning Immunity-Boosting Menu May Work Wonders For You Too)

"Measured eating in this house courtesy Virat Kohli," wrote Anushka Sharma on her Instagram story. In the video that she shared, Virat Kohli could be seen taking out small kernels of Poha or flattened rice out from a bowl with a spoon. He had placed the bowl on a weighing scale and was attempting to measure exactly 100grams of Poha by adding or reducing the amount of it in the bowl. Hilarity ensued as Virat Kohli cracked a pun, "You know I love my hundreds." Anushka Sharma chuckled at his joke and said, "That was so cheesy!"

Measured eating refers to a form of portion control wherein each dish or meal is measured with the help of a weighing scale or cups. The idea behind measured eating is that it helps to regulate the amount of each dish being eaten in every meal. Thus, measured eating is an effective way to keep the daily calorific intake in check, and thereby, aid weight loss in the long term. The method is often used by people who are following a strict diet regime and attempting to shed some kilos. Athletes and sportspersons often use the measured eating method even in their daily lives.

On the work front, Anushka Sharma recently produced the Netflix original film 'Bulbbul', which has got great reviews and much admiration from the industry. Virat Kohli is yet to return to the cricket field with most international series called off due to the Covid-19 pandemic. We hope to see more glimpses of their food sojourns soon!