According to a recent study, a large number of infants and toddlers are consuming added sugar that is more than the recommended levels, through their regular diet. 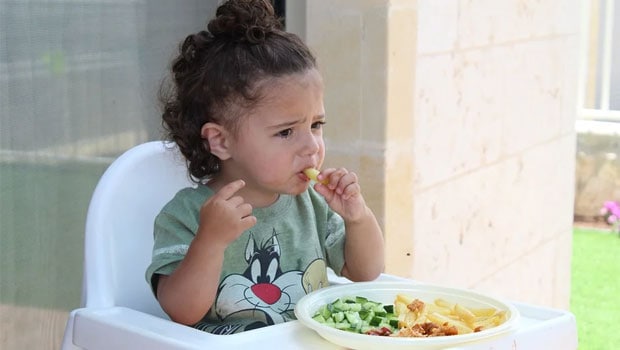 The study is based o the fact that unhealthy eating habits start young.

Unhealthy eating habits can start young, in fact, as young as toddlers or infants! If the findings of a new study are to be believed, a large number of infants (6-11 months) and toddlers (12-23 months) are consuming added sugar that is more than the recommended levels, through their regular diet.  When a child is weaned off from breast milk or top milk feed to solid foods, parents should take care of the amount of added sugars in the foods. Other researches have proved that eating habits formed during the formative years, contribute in forming long-lasting dietary patterns. This transition period is critical as it lays the foundation for the child's nutrition, taste preference and eating patterns.

The new study that was published in the Journal of the Academy of Nutrition and Dietetics, by Elsevier, tried to establish trends of added sugars consumption and also to identify top sources of added sugar. The team found that almost 61 percent and almost all toddlers (98 percent) consumed added sugars in their average daily diets, mostly in the form of flavoured yogurts and fruit drinks.

The team conducted a cross-sectional analysis of 1 day of 24-hour dietary recall data and analysed data for 1211 US infants and toddlers, procured from the National Health and Nutrition Examination Survey. They studied the trends from 2005-2006 through 2015-2016.

Lead author Kirsten A. Herrick, PhD, MSc, Division of Health and Nutrition Examination Surveys, National Center for Health Statistics, Centers for Disease Control and Prevention, Hyattsville, MD, USA said, “During 2011 to 2016, 84.4% of infants and toddlers consumed added sugars on a given day. A greater proportion of toddlers (98.3%) consumed added sugars than infants (60.6%). The mean amount of added sugars decreased from 2005-2006 through 2015-2016 for both age groups; however, percent energy from added sugars only decreased among infants.”

(Also Read: Why Is Organic Food Important For Your Baby Or Toddler? Find Out Here)

Top sources of added sugars identified for infants were -

Top sources of added sugars identified for toddlers were –

"Our study's findings about infant and toddler diets should raise awareness among health organizations and practitioners and inform future guidelines and recommendations," concluded Kirsten A. Herrick.