Bowler Navdeep Saini Shared His Superfood With Batsman Manish Pandey. Can You Guess What It Was?

Cricketer Navdeep Saini, in a video shared by Indian Cricket Team on Instagram, is seen preparing a healthy smoothie for team-mate Manish Pandey, after the latter scored big in Friday's match. 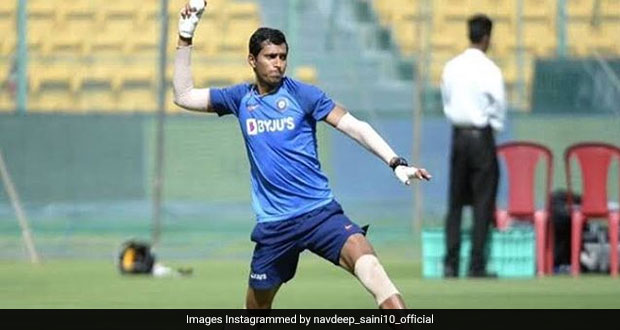 Both Navdeep and Manish are one of the fittest players in the team.

With the ongoing T20I series currently going on against New Zealand, the cricket fever across the country is at an all-time high. Team India has been on a roll since the series began in New Zealand on January 24 with four wins in four matches. While the team might be playing tough on the pitch, the fun banter between the players off the pitch has recently revealed the superfoods that might have been a helping hand in this winning spree. Now, haven't we always wanted to know what the players' diet would have been?

Thanks to bowler Navdeep Saini, we now know the superfoods that our top players might have been bingeing on! The official handle of Indian Cricket Team posted a video on Instagram where Navdeep is making a special smoothie for his teammate Manish Pandey. Manish was a star player in the 4th T20I against New Zealand in Wellington. In the video, Navdeep can be seen sharing the recipe of his fruit smoothie that is healthy and looks rich and delicious. The smoothie consisted of two scoops of protein, one banana and one apple along with some dry fruits and water. The ingredients were mixed together and served to Pandey, who was visibly excited to share Saini's superfood. The team captioned the video, "@navdeep_saini10_official reveals his superfood as he makes fruit smoothie for @manishpandeyinsta . How did it turn out? Watch to know!" After having the smoothie, Manish gave Navdeep a hug, thanked him and said it's one of the best smoothies he has had in a long time. Look at the video below:

While, protein is necessary for our body, the combination of dry fruits with bananas has always been a great one as they provide many essential nutrients such as fibre. Both the players are one of the fittest in the team, and now that we know the secret, isn't it time to steal this stellar smoothie recipe to include in our diets as well?