Dog Viral Pics: A cute dog named 'Uni' has taken Instagram by storm, thanks to his adorable antics and the way he smiles when he's around food. 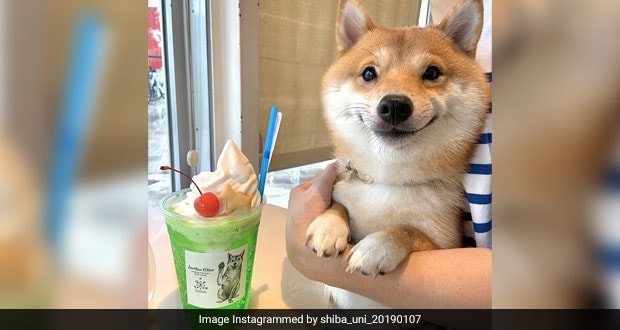 Viral Pics of Japan's Dog: This cute dog smiles the widest when he's around food.

Food isn't just a means of sustenance for us - it's a feeling in itself. Starting right from our childhood till we grow old, there are a plethora of dishes that we weave memories around. Many people across the globe have turned to food in these testing times as a means of recreation and innovation. And it turns out humans are not alone in the food obsession! A cute dog named 'Uni' has taken Instagram by storm, thanks to his adorable antics and the way he smiles when he's around food. Check it out:

(Also Read: 5 Adorable Pet Videos That Went Viral For The Love Of Food)

The dog - Uni - is from Tokyo, Japan, and has amassed a fan following of 98.5k followers and counting on Instagram. He is a dog from the Shiba Inu breed - one of the most popular companion dogs in Japan. Uni is just a couple of months old, but still the little puppy's cute pictures have gone viral and how.

The photos featuring his daily life have won over the internet, and it looks like he has a special spot for food too. Many of the clicks featuring on Uni's Instagram profile show him sporting a wide grin for a variety of foods such as spaghetti, pizza, bubble tea and more. Netizens related to the way he reacted around food and it struck a chord with millions of users across the internet. Take a look at some more of his pictures:

(Also Read: This Owl Cafe In Russia With Birds As Pets Is A 'Hoot' With Visitors!)

Uni's happiness to see food is totally every one of us. We could all take notes from the cute puppy to enjoy life's simple pleasures a little more, and worry a little less. What did you think of the adorable dog? Tell us in the comments below!