The first ever chicken nugget has been sent into space by a British supermarket chain to celebrate their 50th birthday in 2020. 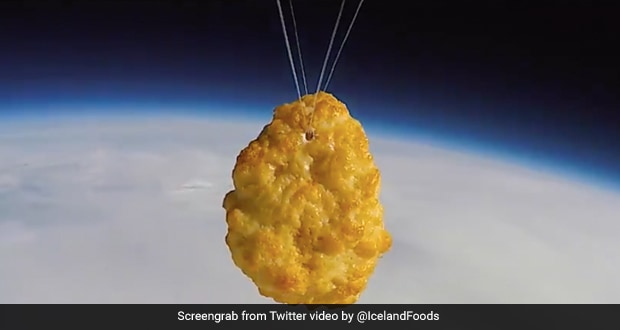 A chicken nugget has journeyed from space back to Earth.

Chicken nuggets are one of the hot favourite snack items for chicken lovers. Juicy, succulent chicken pieces encased in a crispy and crumbly coating - what's there not to like about this evergreen dish? A bizarre news about chicken nuggets recently surfaced on social media. Iceland Foods, a British supermarket chain, has sent a chicken nugget into space for the first time ever as a part of their 50th birthday celebrations. Take a look at their tweet to see the video of it being sent into space:

We don't know who needs to hear this, but we sent the first ever chicken nugget into space today ????‍????

Why? We have no idea, but it was out of this world! ???? pic.twitter.com/XGmkT9ShBO

The video of the chicken nugget being sent into space has received over 600k views and counting on Twitter. Netizens couldn't get enough of the hilarious way to celebrate the 'out of the world' chicken nuggets. The video showed how the chicken nugget was thrown into space and its journey captured on camera. According to reports, the chicken nugget reached about 1.10 lakh feet above the Earth in a time period of 45 minutes. It then returned back and landed safely with a parachute as shown in the video.

Twitterati couldn't help but react to the unbelievable news. While some called it the first good news of the dreary year 2020, others wanted to know some more details about the 'out of the world' chicken nuggets. Take a look at some of the hilarious reactions:

I thought "there MUST have been chicken nuggets in space, they send Americans up all the time" so I looked up all the known NASA menus...

They have sent chicken patties (larger, round), chicken teryaki & similar, but never nuggets. Well done! You beat America in this space race.

Lots will ask 'Why?', but the real question is 'Why not?'
Well done, a applaud this.

I'm glad to see the nugget arrived safely, did you eat it? I would've eaten it... pic.twitter.com/4aEaDYOtYB

Promoted
Listen to the latest songs, only on JioSaavn.com
— Solid Snake (@SolidSnakeMig) October 13, 2020

What did you think of the unique birthday celebrations of the company? Would you like to see an Indian company attempt the chicken nugget feat too? Tell us what you think in the comments below!

Is Your Khoya And Mawa For Festive Sweets Safe? FSSAI Suggests Getting Them Tested For Adulteration
Ali Fazal Celebrates Birthday With Two Chocolate Cakes And Hilarious Surprise From Friends (See Pics)