Have You Seen This Viral Photo Of Mice Fighting Over The Last Crumb Of Food?

Titled 'Station Squabble', Sam Rowley's click freezes in time the tussle between two mice for the last crumb of food at a London Tube station. 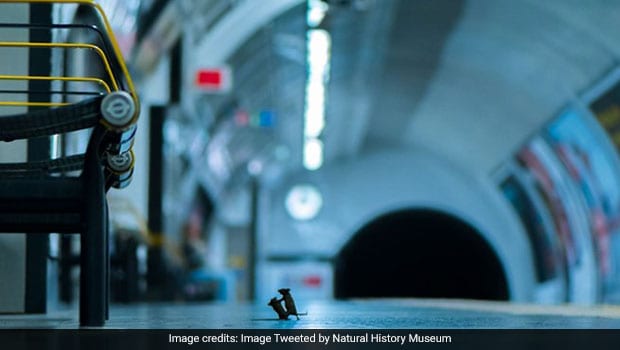 This award-winning image captures the fight over food.

Food is important to humans, as much as it is to animals. Our ancestors were known to spend an endless amount of time scouring and gathering food. Food was an important resource that was often the source of many a conflict as well. Photographer Sam Rowley captured this very tussle for food in a single frame in his award-winning photograph shared by Natural History Museum, London. Titled 'Station Squabble', it is a click freezing in time the tussle between two mice for the last crumb of food at a London Tube station. Take a look:

The winner of this year's @LumixUK#WPYPeoplesChoice Award @NHM_WPY is Sam Rowley, with his well-timed portrait of two mice scrapping over food on a London Underground station platform. pic.twitter.com/5oOuxXxNVA

Sam Rowley's image was the winner among more than 48,000 entries in the Wildlife Photographer Of The Year Competition. The image was selected by the public as the ideal one in the LUMIX People's Choice Award category. He had to wait five nights in the dark at a station platform, according to the post by Natural History Museum.

The freeze frame is more than just about the quest for a morsel of food between two mice. "The tunnels are a desperate place to live if they need to have a boxing match over a tiny little crumb. I hope it shows people the unexpected drama found in the most familiar of urban environments," elaborates Sam Rowley in NHM's blog post on the photograph.

Twitter reactions to the viral picture were quite surprising. People said that the two mice looked like they were waltzing, rather than fighting over food. Several others were quite astonished to see that mice fight each other in the way that was captured in the picture. Another user compared the picture to an episode of the popular cartoon Tom and Jerry. Here are some reactions:

That is incredible! I never knew mice fought each other like that! ????

Maybe they were doing the tango

Are you sure this is not a photo of Romulus and Remus fighting over what to name the city that eventually became Rome? ????????

Promoted
Listen to the latest songs, only on JioSaavn.com
— Craig Grainger (@CraigJCG) February 13, 2020

What do you think the mice were up to? Tell us in the comments below!