It's Biryani Day For Malaika Arora, Geeta Kapoor And Terence Lewis; Guess Who's The Chef

Hint: She's a famous Bollywood director and choreographer who is also famous for her cooking skills. 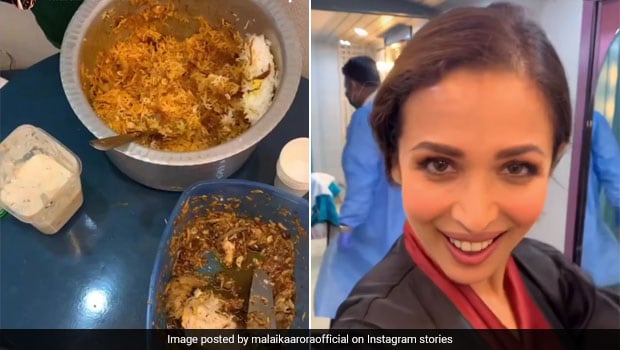 Malaika Arora is one of Bollywood's fittest actors

Malaika Arora is one of the fittest actors of Bollywood, and at 45, she can give any youngster run for their money when it come so fitness. But the actor never endorses any crash diet, in fact, she also loves to indulge every now and then, especially if the feast is curated by her B'wood friends and colleagues. So, when Bollywood director Farah Khan dropped by on the sets of famous dance reality show with some home-made biryani, everyone decided to take a break from their strict diet, including Malaika.

From the looks of it, Farah would be a guest judge in one of the upcoming episodes of the reality show. Malaika took to Instagram to give us a sneak peak into some of BTS action. We saw the whole cast from Malaika, Geeta Kapoor and Terrance Lewis drooling over the biryani, raita, curry and pudding brought over by Farah Khan. It is no secret now that Farah Khan is also an excellent cook and host - many Bollywood actors swear by her culinary skills. In the video, Malaika pans over everybody's plates and glee full faces, and when she finally turns to Farah Khan to ask what does she have to say over the overwhelming response for her Biryani, she says, " I think I am only called to these shows for my catering services." "Also, I finished everything", says Geeta in the video, "the proof (of Farah's exceptional cooking skills" is in the pudding", affirms Terence.

(Also Read: Malaika Arora Is Drinking This Probiotic Drink; 3 Reasons Why You Should Too)

"The perks of having @farahkhankunder on the shoot.... it's a feast right", Malaika wrote in her caption.