Jennifer posted a picture of her biting into some sinful macarons, one strawberry and one chocolate. 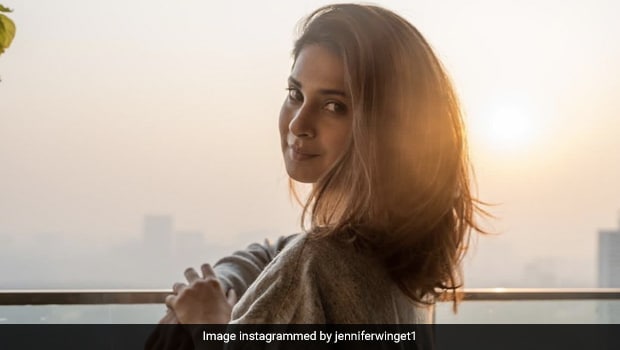 Jennifer Winget is one of the most successful TV actresses

Jennifer Winger is one of Television's most sought after actresses. She is also one of the biggest fitness and fashion icons to have emerged in recent times. Jennifer - who has starred in hit shows like Bepannah, Dil Mil Gaye, Saraswatichandra, and Beyhadh - has carved a niche of her own and her versatility as an actress has been lauded by fans and critics, alike. Rumour has it that she is also one of the highest-paid TV actresses. Jennifer recently added another feather to her cap by hitting 10 million followers on Instagram. She made a special video for her fans who have supported her through the journey, making her one of the biggest TV actors on Instagram. Shortly after the video that she posted on Valentine's Day, she posted another picture of her biting into some sinful macarons, one strawberry and one chocolate. "Still reeling in from the celebrations ...clearly!!! Heyyyy Macar-ona!", she captioned the image. The wordplay on the classic celebratory Spanish song 'Hey Macarena' is surely a smart one. If you are also a macaron lover (like us), perhaps you could use it some time (we know, we are!)

(Also Read: Man On Hospital Bed Is Actually A Cake! Viral Pics Creep Out The Internet)

Jennifer was last seen in the role of 'Maya Jaisingh' in Sony TV's 'Beyhadh 2'. The show was doing well until it had to end abruptly due to the lockdown. Jennifer played a negative role in the second season of the show as well and starred opposite former Bollywood actor 'Ashish Chowdhary'. Jennifer was placed at the 13th position in Eastern Eye's Sexiest Asian Women List 2018.