Miley Cyrus Chose Indian Food To Celebrate Her MTV Music Awards Win; But Wait, Where Did That Pizza Go?

Miley Cyrus posted a picture of herself posing with a pizza on Instagram, suggesting she dug into the Italian delicacy; but wait, she did not. Instead, she ate Indian food. 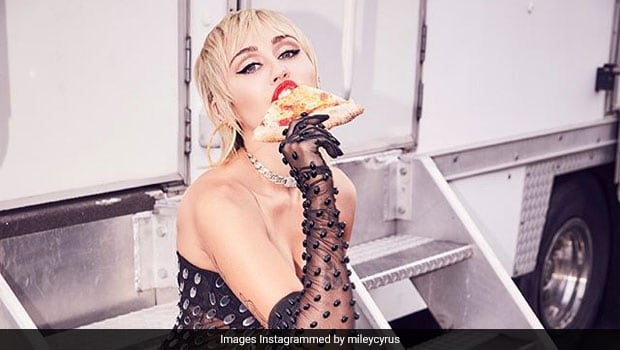 Which food do you pick to celebrate a special occasion? Regular Indian food? We don't think so. Pizza? Yes, most of you would jump to grab it. Special feast demands special foods, and pizza is the topmost non-Indian food that is most popular in India. If it's pizza over Indian food for us in times of celebrations, it's quite the opposite for Miley Cyrus. The American singer/actor - who shot to fame years ago with her teen show 'Hannah Montana' in which she played the role of the protagonist - is now making waves with her thriving pop music. Miley Cyrus bagged two awards for her hit song 'Mother's Daughter' at the recent 2020 MTV Video Music Awards and guess how she chose to celebrate - by eating Indian food!

Right after her big win, Miley Cyrus posted a picture of herself posing with a pizza suggesting she dug into the Italian delicacy, but wait, she did not. Instead, she ate Indian food and ignored the pizza in her hand completely. Miley wrote in her Instagram post - "Truth is I didn't eat the pizza... I had 4-day old Indian food to celebrate instead."

This cryptic post sparked off a debate of sorts among Miley Cyrus's followers. Some struggled to believe that she did not eat pizza that was right in front of her. Comments like "Why would you not eat the pizza" and "So then who ate the pizza" flooded in.

One user asked "How does one not eat the pizza?", and got a befitting reply - "Because one falls prey to Indian food!"

Some users showed their curiosity with comments like "Where's the Indian food" and "What did you have for Indian food". And, there were others who were just happy with her pick - "Indian food is better than pizza", "Yes. Pizza and Indian food for the win".

Indian fans even wrote - "I will make you butter chicken someday" while another wrote "I send love from India".

Miley Cyrus can choose to eat whatever she wants to but we are definitely pleased with her food choices because we love Indian food and pizza in equal measure.