Onion Price Surge: A number of users on Twitter brought out their creative best to make hilarious memes on the soaring onion prices. 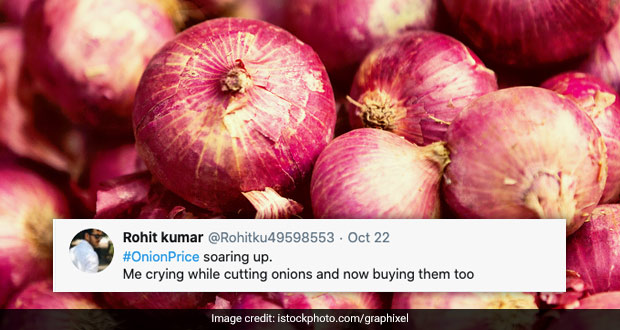 Onion price surge got out the creative best from netizens.

Onion prices have been skyrocketing across wholesale markets across India. With prices ranging between Rs. 80 to Rs. 120 in a number of cities, the government has banned the export of the vegetable for now. According to the Union Ministry of Consumer Affairs, Food and Public Distribution, there has been a sharp spike in prices by Rs 11.56 per kg over the last 10 days; this has taken the all-India retail price of onion to Rs 51.95 per kg. This is primarily due to the shortage of supply due to excessive rainfall, especially in the states of Maharashtra and Madhya Pradesh.

The fresh onion crop is expected to come in by mid-November from Rajasthan. As citizens await some relief on the front, Twitter decided to make the most of the moment. A number of users brought out their creative best to make hilarious memes on the onion price surge. #OnionPrice soon began to trend on Twitter with many users sharing their feelings on the subject.

While some made references to films like 'Munnabhai MBBS' and 'Kabir Singh', others couldn't help feel envious of their Jain friends. Take a look at some of the best memes:

Me trying to purchase onions: #OnionPricepic.twitter.com/f6fV8ENMuH

#OnionPrice high again this year
Meanwhile onions to other vegetables be like..... pic.twitter.com/1Z9A15Ku66

Promoted
Listen to the latest songs, only on JioSaavn.com
— Das Prasad (@Dasprasad4) October 22, 2020

Trust Twitter to make a serious situation into a funny one! We hope onion prices settle soon and provide citizens the much-needed respite. Until then, we all could use a few laughs.