The video featured a seagull who stealthily attempted to grab some snacks from the local supermarket. The results were surprisingly hilarious! 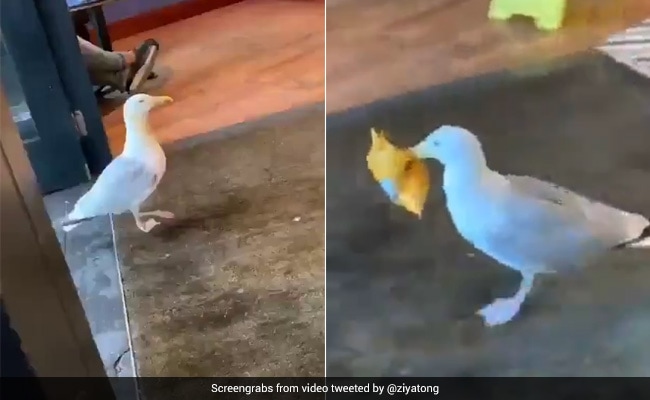 This clever seagull shoplifted its way into a supermarket.

Scientists and researchers have often said that animals have a consciousness of their own. Their own way of communicating and comprehending the world around them is a vast area which we humans are unaware of. There are a number of animal videos on social media which prove that they may not just be intelligent but also have an understanding of human behaviour. A recent video which was shared on Twitter proves this theory to be true. The video featured a seagull who stealthily attempted to grab some snacks from the local supermarket. The results were surprisingly hilarious! Take a look at the video:

note the casual entry and hurried exit
this is an experienced seagull shoplifter pic.twitter.com/WnIOkIsqfK

(Also Read: 5 Adorable Pet Videos That Went Viral For The Love Of Food)

The video was shared on Twitter by user @ziyatong. In the video, the seagull first entered the shop with an air of innocence, darting glances all around to check for humans. Then it crept up slowly to the closest aisle which had chips neatly stacked in a pile. It grabbed the packet of chips with its beak and ran as quickly as possible to avoid getting caught.

The seagull's surprisingly intelligent antics won over social media. Netizens couldn't stop rolling with mirth at how quickly the seagull rushed out of the store. The video went viral on Twitter garnering over 5.7 million views and counting. It also received over 422k likes and 104k comments. Take a look at some of the hilarious responses to the video:

Police Officer: Can you describe the suspect, ma'am?

Cashier: He was about a foot tall...

That dude was cool as a cucumber (“Don't look at me. Nothing unusual here.”), then hauls ass after grabbing the loot (“Watch out for the wet floor. You'll never catch me.”). <cackling laughter fades in the distance>

A seagull at the beach stole a half sandwich right out of my hand. Between bites. Felt like I had been mugged.

Seagulls love chips lol. I've been harassed by seagulls at the beach when they saw me eating a bag of chips.

Promoted
Listen to the latest songs, only on JioSaavn.com
— Nervous chemgal1 (@chemgal1) August 9, 2020

Have you experienced such a funny incident in real life too? We'd love to hear about it - tell us in the comments below!