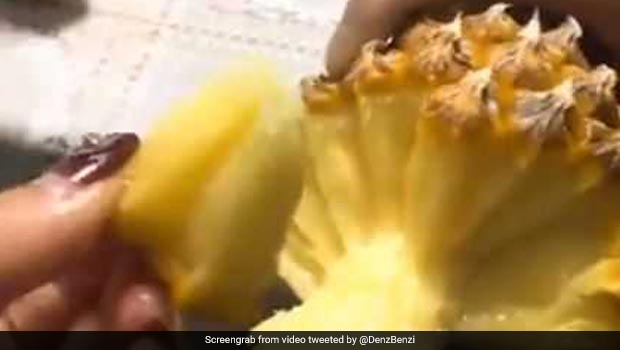 After breaking the internet with its appearance in the cringe pop song 'PPAP' (Pen-pineapple-apple-pen) in 2016, the prickly pineapple is back with a vengeance. The tropical fruit has been making headlines after a Twitter user shared a novel way of eating it and that has been bamboozling the internet ever since it first appeared. The video shows a very unique, but seemingly efficient way of eating pineapple by tearing sections of the fruit away from the core by holding the spiky exterior. Twitter user Dennis Naghizadeh (@DenzBenzi) first shared the video on Twitter, expressing utter shock on the fact that the tricky fruit can be enjoyed without using industry-grade tools to cut it, as has been popular practice till now. The tweet with the video has been liked by close to 400 thousand Twitter users and has got thousands of mentions and replies on the micro-blogging website.

Take a look at the video that has now gone viral:

The video has been shared on other social media websites like Instagram and Facebook as well and people still can't believe that they wasted so much precious time peeling and chopping pineapple when all they had to do was cut the pineapple in half and pull individual sections away. While some people have been sharing shocked reactions to the video, some others have confessed to buying pineapple after watching the video, just to try the technique out. The video makes it look incredibly easy and the technique seemingly requires minimal effort.

Also Read: How To Peel Pineapple? Quick And Simple Tips To Follow

Here are some other fruits that you might be shocked to know you have been eating the wrong way, all your life:

Peeling kiwis can be tricky as doing it with a knife may result in a lot of pulp attached to the discarded peels, ending up in the bin. A more efficient and waste-proof way of peeling kiwis is to cut the top and bottom of the fruit and then scrape the pulp with the help of a spoon. The cylindrical, bright green pulp of the fruit will be ready for consumption.

We've all been peeling oranges all wrong all this while and spending way too much time in doing so, than we should be. To do it more efficiently, slice the top and bottom of the outer peel horizontally then make one incision in the middle of the peel down the length of the fruit. Simply unfurl the orange bloom to get separated sections that you can simply pop in your mouth!

This is one of the trickiest fruits to peel as the bright red and juicy seeds of the fruit are deeply embedded in the peel. Cut the fruit lengthwise into two halves and then simply tap the shell of the pomegranate gently with the back of a wooden spoon and you'll see the seeds pop out into the bowl below.

Have any more unheard-of or more efficient ways of cutting or peeling fruits? Let us know in the comments section below!