The Guinness Book of World Recordshas officially recognised a 70-layered bean dip as largest layered dip in the world. 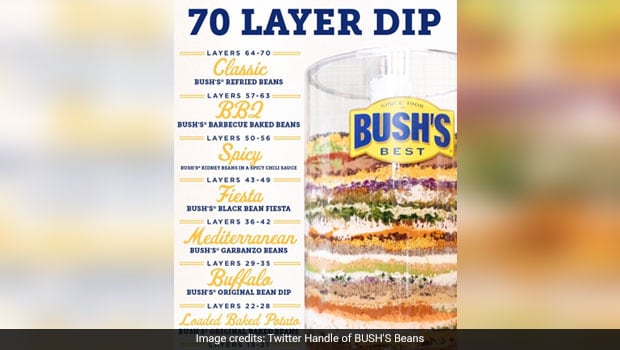 Largest Dip In The World

It looks like ‘beans' are on roll! The Guinness Book of World Records has officially recognised a 70-layered bean dip as ‘largest layered dip' in the world. This dip, with 10 stacks of 7-layered-dip recipes, placed on top of the other, was created by Bush's Beans from the United States. Both the Twitter handles of Guinness World Records and Bush's Beans confirmed the news last week. “New record: Largest layered dip: 439 kg (1087 lbs). Congratulations @BushsBeans,” read the Guinness World Records' tweet.

Sharing their excitement, Bush's Beans wrote on Twitter, “Omg we made the #worldsbiggestbeandip and @GWR was there and they said it was the world's largest layered dip. I`m literally shaking and crying.” They further informed through the micro-blogging site that 19 people worked for 12 hours to make the dip, which was donated to a local charitable organisation. A food-hygienist was also present on-site to ensure that the food safety guidelines are followed properly and “keep the 1087 lbs of dip under 40°F so it was safe to eat.”

Spilling the secret behind the ‘largest layered dip', they wrote that all they had to do is make sure that “there are 70 layers”. In another tweet, they informed that if all the beans of the dip are added up, there will be enough beans to make a “70 layer bean dip”.

the secret to making a 70 layer world record bean dip is to make sure there are 70 layers (there are) and also that you break a world record (we did) pic.twitter.com/CV7piVCXCQ

Earlier Dwayne Johnson, popularly known as “The Rock”, along with his team ‘Seven Bucks Digital Studio' made record by creating a 7-layered dip, weighing 540 pounds. As per the Guinness World Record website, “Taking over 5 hours and 4 people to prep and construct, the massive version of a classic 7 Layer Fiesta Dip was prepared in a 100 gallon fish tank at Seven Bucks Digital Studios in Los Angeles, California.”

.@TheRock and his team at @SevenBucksDS created the largest 7-layered dip in time for #SuperBowlSunday > https://t.co/vRXx20Jn7fpic.twitter.com/8drkQIfIqR