Whitney Rutz with her 7-year-old daughter Elsa Rutz, runs a huge fundraiser program under Oregon Food Bank. It all started with the mother-daughter duo baking a giant cinnamon roll at home during lockdown and posting it on social media. 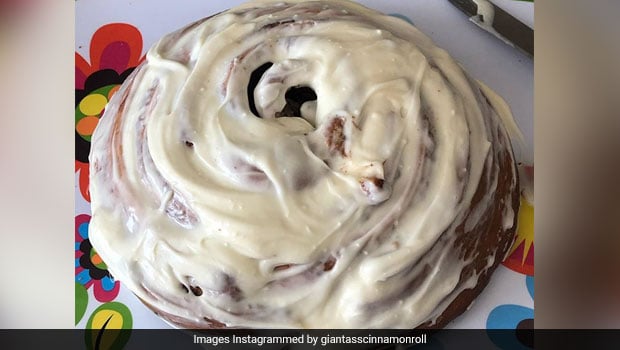 The cinnamon roll is one full food diameter.

What started out as quarantine cooking for fun, turned into a massive charity project. Meet Whitney Rutz, who along with her 7-year-old daughter Elsa Rutz, now runs a huge fundraiser program under the ambit of Oregon Food Bank. It all started with the mother-daughter duo baking a giant cinnamon roll at home during lockdown and posting it on social media. The post garnered such an enormous response that Rutz thought of doing more with it, for greater good.

So, Rutz started auctioning her giant cinnamon roll and donated the proceeds from highest bid to Oregon Food Bank. She generated so much money that Oregon Food Bank called Rutz and offered to set up an exclusive fundraiser program on its website, and there has been no looking back ever since. Now, for every $500 dollars donated to the food bank, Rutz, with the help of her daughter, bakes a giant cinnamon roll to donate to frontline healthcare workers fighting Covid-19 virus in Portland.

"About a week into social distancing, after learning two of my friends had been diagnosed with COVID-19, I had a good scream-cry session. I was scared and sad. In an attempt to snap out of it, I turned to baking and made one of my giant cinnamon rolls. After posting it to social media, the response I got back from friends and family made me wonder how much money one giant cinnamon roll could garner. That led me to the idea of auctioning one off for charity." Rutz wrote on her fundraiser page.

Whitney Rutsz and Elsa Rutz first make the giant cinnamon roll of one foot diameter on an iron skillet, and then bake it in their oven to rise. Here's how it looks like -