MS Dhoni's fan page shared a video of the cricketing legend making Pani Puri and serving it to his friends RP Singh and Piyush Chawla. 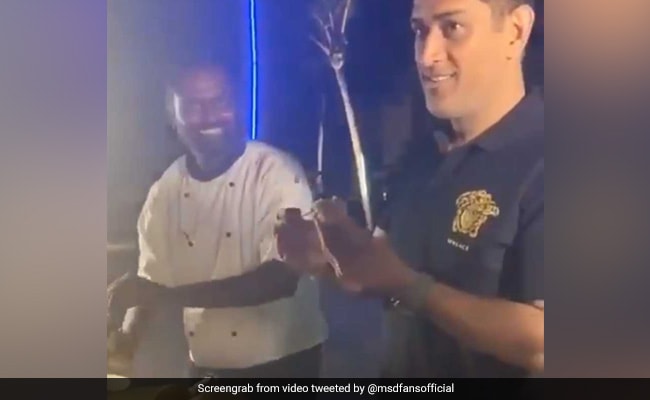 MS Dhoni prepped up some delicious pani puri for his friends.

The last time we saw 'Captain Cool' in action was during the 2019 World Cup. The tournament had a bitter end as the Indian Cricket team was eliminated from the finals. Speculations soon began doing the rounds about MS Dhoni considering retirement. Since his last outing on the field, MS Dhoni may not be actively pursuing the sport, but it is still too soon to write him off entirely. His fan following is intact nevertheless. Serving as evidence, a fan page shared a video of Dhoni serving Pani Puri while on vacation! Take a look:

Straight outta Maldives, our rockstar is seen making a couple of pani puris!????‍????

The cricketer is currently vacationing in the Maldives with his family and friends. In the video, MS Dhoni was seen preparing Golgappas for his friends. He took a golgappa, filled it with aloo and channa and topped it with two different chutneys. He then proceeded to fill it with water and served it to his friends RP Singh and Piyush Chawla, who then savoured the delicious street snack. The entire process of preparing the golgappa was done with a lot of calm and patience - a style that is characteristic to MS Dhoni's while he is on the field too.

Needless to say, fans went gaga over the video, calling MS Dhoni 'multitalented' and a 'star'. The fan page that shared the video captioned it as, "Straight outta Maldives, our rockstar is seen making a couple of pani puris! Our favourite chaat just became even more delectable." Other fans also reacted to the video calling RP Singh as extremely 'lucky' to be having pani puri made by MS Dhoni, wishing themselves to have the good fortune of being served by him. One fan commented, "My most favourite things in this world MS Dhoni and Pani Puri." Take a look at some reactions:

My most favourite things in this world Mahi and pani puri

It was interesting to catch a glimpse of the foodie side of the cricketer, who usually prefers to keep his private life under wraps. Although people may have begun to bid farewell to the legend MS Dhoni, thanking him for his good work and writing off his career - we believe he definitely has a long way to go. His all-knowing smile and calming presence will remain etched in the country's hearts for eons, as will his contribution to the sport of Indian cricket.