Viral: After Banana Bread, Frog Bread Is The New Baking Trend On TikTok

After banana bread, which cooked up a storm on social media recently, it is now 'frog bread' that has taken over as the latest baking trend. It started with TikTok videos of people attempting to bake their bread in the shape of a frog. 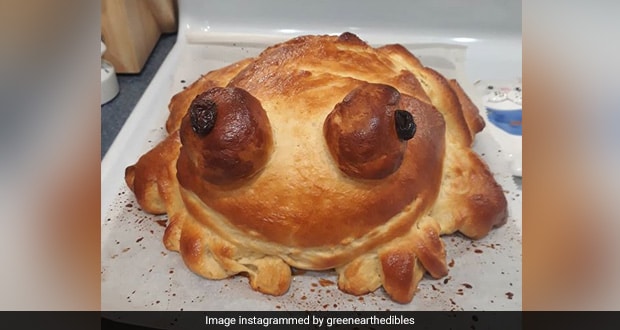 Who knew the bored, home-bound minds in lockdown could actually turn so creative. Quarantine cooking ideas are scaling new heights by the day providing us enough fodder to hone our cooking skills. Baking has become the new universal favourite pastime. Not just cakes, people are even making their own breads at home. After banana bread, which cooked up a storm on social media recently, it is now 'frog bread' that has taken over as the latest baking trend. It started with TikTok videos of people attempting to bake their bread in the shape of a frog, and the trend followed to other social platforms of Twitter and Instagram as well.

Videos and pictures of frog bread or froggy bread (as a part of netizens are calling it) are being shared online for feedback and comparisons, turning it into a sort of competition of whose bread looks closest to a frog. The pictures of bread with four crouching legs, tiny dough balls as eyes, raisins as eyeballs, and a deep slit to look like a smiling mouth, are raking up millions of likes and comments.

♬ Funny Laugh no no no - Sound Effect

A Twitter user shared pictures of frog bread after picking the idea from TikTok and also shared a link to 2005 blog tutorial of frog bread for other users to try the recipe that she followed. The post turned into a viral thread with many users replying with their own creations.

Are you too curious to see what frog bread looks like or want to try making it? Just look up #frogbread on TikTok or any social media site and you'll find scores of posts with pictures and recipes.