Viral Now: A Photo Of Kiwi Pizza Disgusts The Internet And This Bollywood Celebrity Agrees

A debate goes on between people who love pineapple-topped pizza and people who hate it. But now something disgusts them both equally - the kiwi pizza! 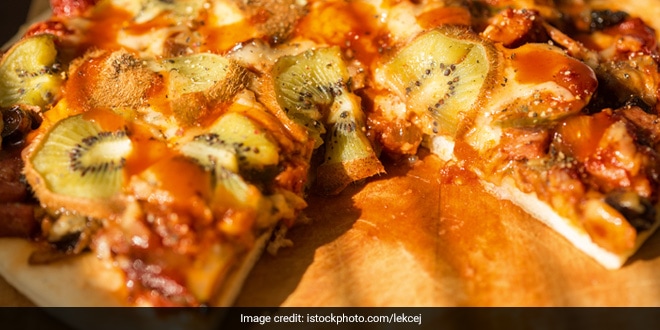 As if pineapple pizza wasn't already enough, kiwi pizza is here to disgust us equally.

There are very few things that the food community collectively agrees upon. Opinions are especially divided when it comes to bizarre dishes and fusion foods that are invented every now and then. Pizza is one such dish which is often subjected to many eccentric tweaks, many of which do not go down well with lovers of the traditional Italian delight. There is an ongoing debate between people who love their pineapple-topped pizza and people who hate it with equal measure. But now something has come up that disgusts them both equally - the kiwi pizza!

I have can now say I have witnessed hell@DaddyWarpigpic.twitter.com/WjC48p9Y3U

A tourist shared a picture of the horrifying dish on Twitter, saying, "I can now say I have witnessed hell." He had tried it while on vacation in Sweden, wherein a Danish restaurant came up with the idea of having pizza on their menu with kiwi and ham as the topping. Users poured in their reactions on the social media platform, with mostly disgust and contempt at the fruit-based pizza. People refused to believe that such a dish could have been invented in the day and age that we lived in. They also attributed the pizza to Hawaii, which is the original place that pineapple pizza was born in.

The anger percolated down to Bollywood too, as one particular Bollywood celebrity pizza lover also expressed her thoughts about the weird pizza. Actress Parineeti Chopra too took to Instagram to share a picture of the viral Kiwi pizza with her anger and disgust on seeing shared a picture of the pizza, saying, "Okay who the hell does this? Pizza lovers, get together. We can fight this." See her Instagram story here:

Some users, however, agreed that it may not be that bad after all and that one shouldn't jump to conclusions about it. Various Twitter users cited their experiences trying pizza toppings varying from maple syrup to even banana, and they admitted that they liked it. As the debate around the viral kiwi pizza continues, one thing is quite clear - there's no end to bizarre and weird food inventions that one can come up with!