TikTok content creator Ayla Jalyn shared the hilarious video of her quest to clean the pizza pan which had come when her husband ordered from a popular pizza chain. 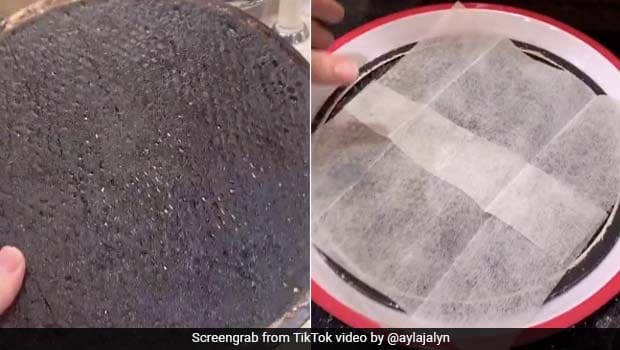 Cooking is said to be a therapeutic process - the entire exercise starting from the preparation to actually cooking and then eating the lovely creation, what's not to enjoy? People often complain about how doing the dishes after eating is a bothersome task, which most of us lazily skip or procrastinate for later. This was exactly the subject of a video on TikTok which showed the tedious process of cleaning a pizza pan by using practically every possible way. Take a look at the video that was shared:

TikTok content creator Ayla Jalyn shared the hilarious video of her quest to clean the pizza pan which had come when her husband ordered from a popular pizza chain. The pan was absolutely black when she started to clean it, and even after several attempts it stayed absolutely the same. Ayla Jalyn tried multiple ways to clean the greasy, dirty pan with very little or no success. The stubborn marks absolutely refused to go even with solutions such as vinegar, detergent, cola, or baking soda!

The video struck a chord with viewers, and garnered over 10 million views on TikTok. The creator's hilarious commentary along with the video was appreciated too. Others praised how determined she was to rid the pizza pan of the grease which refused to budge. She shared three more videos on TikTok with different concoctions and attempts to clean the pizza pan, each of which got viewers by the millions. Take a look at her last attempt video, wherein the pan looks cleaner but mostly the same:

Promoted
Listen to the latest songs, only on JioSaavn.com
♬ original sound - aylajalyn

What did you think of the viral video series? Tell us in the comments below!