Viral: This TikTok Video Of A Woman Snatching Food From People In A Mall Is Winning The Internet

As per the report, Kat Curtis posted the TikTok video that went viral on her Twitter handle. She wrote "How to get free food at the mall" below it. 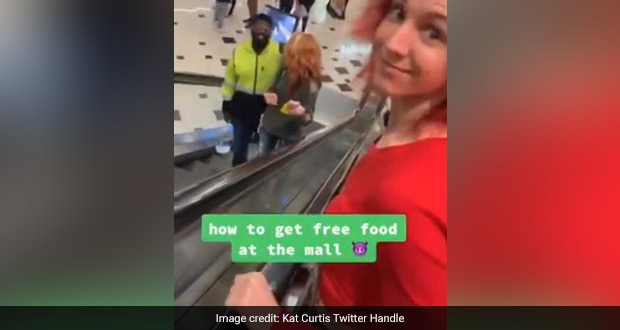 Imagine a situation...you are strolling in a mall with a box of French fries in hand and someone randomly snatches it from you! Sounds weird, right? This is what a TikTok influencer Kat Curtis did recently in a mall in California. She literally snatched food from random strangers while riding the escalator! As per an ANI report, she filmed her antics in California's Glendale Galleria shopping mall. The short clips were posted as a series on the TikTok video-sharing platform.

As per the report, Curtis posted the TikTok video that went viral on her Twitter handle. She wrote "How to get free food at the mall" below it.

The video shows her snatching a handful of French fries from an unknown young man on the opposite escalator who stared back at her in shock. Then she went on to sneakily take bites from burgers that some other people were carrying in hand. The two strangers were left dumbstruck.

Also Read: "How Do You Take Your Coffee", Asks Twitter Food And The Responses Got Us Wishing For Some

I saw this going viral on other people's accounts, so I guess I gotta own up to it: yes, I'm the girl stealing yo snacks at the mall ???? pic.twitter.com/bWbZ62pJXS

There was, however, a mixed reaction by the Twitter community. Some found it hilarious and others were quite annoyed with the prank.

"Love it", tweeted one user; while someone said, "Oh, so you are the person stealing. Well, I hope you try that with me. I'll be grabbing your hair and walking you back in the direction I'm going. Then I'll be calling the cops on you for theft charges. And I'll make sure I appear in court to make sure those charges stick."

"Bingo," said a person; while another tweeted, "You are lucky nobody punched you in the face. You are not even funny."