A viral video captured a little girl selling cookies for Girl Scouts to a security camera. The internet couldn't get enough of the adorable video. 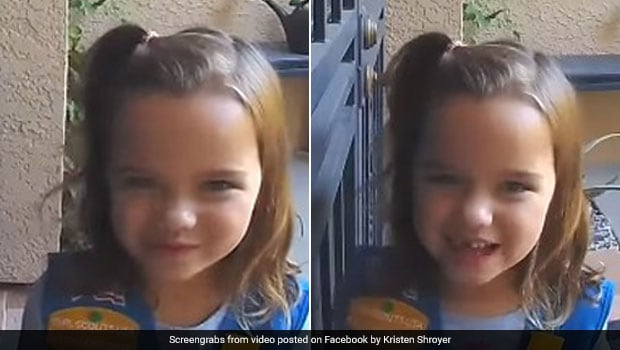 An adorable video featured a little girl and her cute antics.

Children are a source of an abundance of talent and amusement all across the world. We see countless young ones showcasing plenty of interesting skills - ranging from winning spelling bees to chess championships, singing competitions to cooking shows. One popular contest among the children of USA is going door-to-door selling cookies as part of their 'Scouts' activities - competing for who can sell the most to collect money and raise funds. A little girl has taken social media by storm after an adorable video of her surfaced online. We could see her selling Girl Scouts cookies to a door security camera, and the sweet way in which she explains what she has to offer will melt your heart. Take a look:

Allie Shroyer is a resident of Arizona, USA, who featured in the video. "A virtual Girl Scout cookie sales pitch from Allie! Order online and share with anyone you know that loves Thin Mints, too," wrote her proud mother Kristen Shroyer. The video went viral on Facebook and was soon featured by a number of media outlets online.

In the video, we could spot Allie walking up to the camera to explain what she was here for. Dressed up in her girl scouts uniform, she rung the bell and said, "Hello, I'm Allie! Would you like to buy some Girl Scout cookies? What kind would you like? My favourite kind is the purple kind. What is yours?"

Cookies being sold by Scout volunteers is a common sight in the USA.

"You can buy them USD 5 in each, so, would you like one? Or two or three or four or five? Or six or seven or eight or nine or 10? I don't know, maybe 11, 12," she said in the video. She then explained how she was a 'Girl Scouter'and she would sell cookies to everyone. Allie further elaborated that the cookie boxes would also come in many different colours for the customer to choose from. She kept explaining the whole process in a sweet, smiling manner that bowled over netizens.

Facebook users went gaga over her cute sales pitch, outpouring their responses in the comments section. "Best salesperson ever," wrote one user while another commented, "Could she be any cuter?" According to Allie's mom Kristen, the viral video made her cookies a sensation. "Her sales pitch was so successful that she sold over 200 boxes in the first 24 hours," Kristen told KPNX. "We're going to pick up all the cookies and start delivering them next week."

What did you think of the sweet video? Tell us your thoughts in the comments below!