Soha took to Instagram to share an adorable video of Inaaya with her furry friend Masti, making rotis in the kitchen. 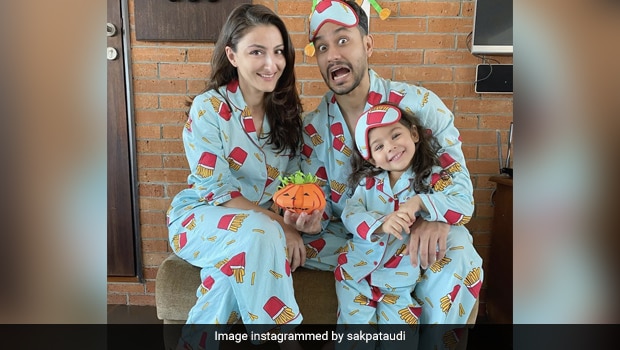 "You are the chapati to my sabzi #inniandmasti", Soha wrote in the video.

Bollywood actor and author Soha Ali Khan's daughter Inaaya might just be a three-year-old but the tiny tot never fails to impress everyone. Her doting parents Soha and Kunal Kemmu keep sharing her shenanigans on Instagram and we keep drooling over how adorable the little one is! Have you seen the hilarious videos of Kunal on daddy duties with Inni (as her parents lovingly call her)? Soha recently shared a video of Inaaya where the baby is up to some serious cooking as she makes roti in the kitchen. The video is just too adorable to miss!

The video has Inaaya rolling the dough with a rolling pin, complete with dusting flour when needed, and we can't be more impressed! Her furry friend and Soha's dog, Masti is also seen in the video.

Isn't this video cuteness overload?! "You are the chapati to my sabzi #inniandmasti," Soha wrote in the caption. Look at how cute Inaaya look while trying to make the perfect roti with those little hands! Many fans and followers were impressed after watching the video with many even praising Soha for teaching such basic skills to her kid. While other hilarious comments said that Inaaya's roti is rounder than they could ever make!

Both Soha and Kunal have always steered towards giving their daughter a holistic upbringing which often shows in the pictures and videos they share.