Single use plastic no more! A recent tweet by a user showcases how disposable plastic cups can easily be replaced by green, biodegradable ones. 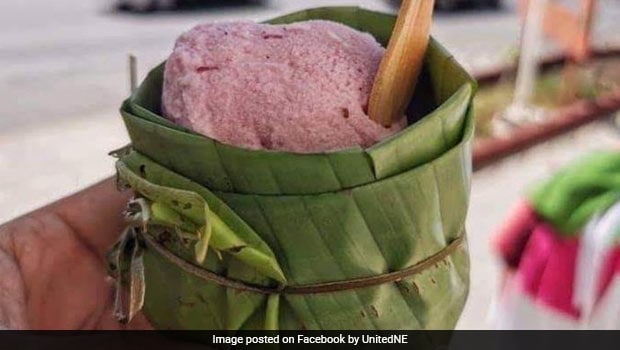 This simple green cup made of banana leaves can help reduce single-use plastic.

The concerns around climate change are now being recognised globally. Many countries are considering going plastic-free in the near future, prohibiting or strictly limiting single-use plastic. This directly affects materials like plastic bags, straws, and even packaging material. While some daily use objects can be replaced by materials such as cloth or paper, alternatives for others are difficult to come by. A recent tweet by a user showcases how disposable plastic cups can easily be replaced by green ones. Take a look at the post:

Green inspiration!
This picture from India ???????? of ice-cream served in a banana leaf cup shows that we really don't need plastic as much as we think we do.

(Also Read: Sipping On Your Favourite Beverages With Plastic Straws? You Must Stop!)

Shared on Twitter by Norwegian diplomat Erik Solheim, the post featured a scoop of ice cream being served in a green cup made of a banana leaf. The leaf was rolled around into a cup and tied with some string to replace the usual plastic disposable cups. Further, the spoon featured with the ice cream was a bamboo spoon rather than the usual plastic one.

The 'Green Inspiration' was actually sourced from an Indian Facebook page called Initiative United North-East. "Small but great start to end plastic waste," was what they called the eco-friendly cups as. Solheim's tweet struck a chord with many Indians across the internet, garnering reactions from all over. Many wrote to point out that the use of leaves for serving was not uncommon in India. Take a look at the reactions:

Have seen this in some other places , even in cities like Mumbai where some places serve icecream on a leaf , kept on a steel plate , and parcel it in leaves

Yeah In my Home town we are using this kind of stuff to serve. Not the only icecream all types of food. Plastic Free Village is our Vision and mission

(Also Read: This One-Of-A-Kind Cafe In Delhi Is Giving Meals In Exchange Of Plastic; Know More)

We hope to see this interesting eco-friendly cup being used to serve other things apart from ice cream too. What do you think of the unique way of serving ice cream? Do you feel this measure help reduce single-use plastic waste and tackle climate change? Tell us what you think in the comments below!