Leaf Plates From Germany: Time to Switch Back to Ancient Indian Traditions? 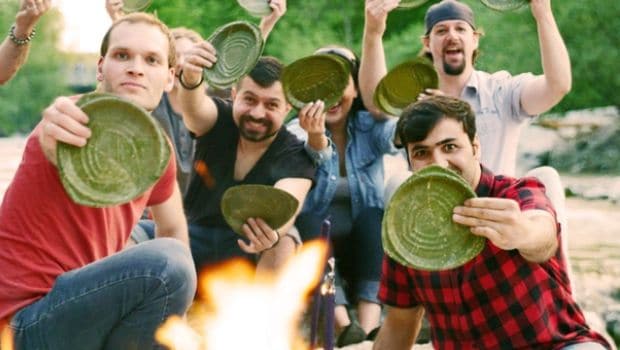 Highlights
Do you remember eating food out of pattals? I do. Raised in the heartland of Uttar Pradesh, I was quite close to the rustic and traditional ways of living as compared to some of my friends and colleagues living in metros. I remember some of my favourite street stalls and most iconic canteens and eateries in Allahabad serving pav bhajis, poori sabjis and samosas in donas made out of dried leaves. My father would note the economical aspect of such a practice, not to mention the fact that leaves are highly bio-degradable and therefore favourable for environmental sustainability.

Cut to today, I don't remember the last time I ate out of a dona or a plate put together by sewed dried leaves. It is discomforting to see so much of plastic waste lying all around. Each year, hundreds of tons of plastic waste is discarded. According to a report published by the WorldWatch Institute, "Approximately 10-20 million tons of plastic end up in the oceans each year. A recent study conservatively estimated that 5.25 trillion plastic particles weighing a total of 268,940 tons are currently floating in the world's oceans".

As one begins to think about it, plastic seems pervasive, omnipresent. It helps in food preservation and also makes easier some of our painstakingly regular chores. It will be a daunting task to think of a world without it - look around you, chairs, tables, water bottles, stationary; all and most is nothing but plastic.

Inclusion of plastic in culinary space has sparked much debate over the recent years. This led to formulation of stringent policies tied to the type of plastic used in food industry. It paved way for the bio-degradable variant, which usually takes three to six months to break down completely. The efficacy and value of biodegradable plastic has lately been at gun point by environmentalists. David Biello of the Scientific American notes, "Bio degradable plastics - particularly those which can break down fast - are contributing to climate change. When disposable utensils made from the plastic called PPO get to landfills, microbes break them down and make methane. While some landfills have mechanism to capture methane, many other let the potent gas loose into the atmosphere".

Clearly, we can try and fancy a world with considerably less plastic, especially when it comes to our everyday eating habits. Giving shape to a similar imagination is a German startup called Leaf Republic. Their business model is quite simple - creating durable but highly bio-degradable and eco-friendly cutlery out of leaves. Their standard plate has three layers all sewn and put together using palm fibers and paper derived from leaves - no artificial agents, chemicals, plastics or additives are used. The leaves are sourced from wild vines of South America and Asia.

Leaf-Republic products can last up to a year and are safe to be used in a microwave. These are waterproof at the same time washable and re-usable. The plates can be discarded back into the nature as they take close to a month to get decomposed.

"It all started with a vision: Outdoor tableware, as renewable and biodegradable as a leaf falling from a tree. And here we are. Next time you eat outdoors, feel the nature in your hands. Enjoy the summer. And the unbeatable feeling of making the world a greener place," as mentioned on the official Leaf-Republic page on Kickstarter.

CommentsLeaf Republic paints a picture of a greener, more sustainable and happier future. An idea so simple has the power to transform into a huge movement that can fight against the menace of climate destroying agents like plastic. Share with us your thoughts on the same. Also, if brought to India, would you give up on plastic cutlery in exchange of a greener alternative? Are you okay in shelling out that extra penny in the name of a better future? Mull over these, we'd be happy to know your opinion.