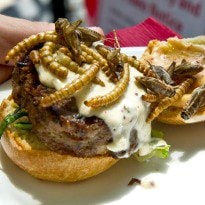 Though slightly uncertain, Erin Kolski pronounced the unusual fare on her plate - a burger made from ground-up grasshoppers - to be surprisingly tasty. "It's a little crunchy. It tastes fine," Kolski said, sounding somewhat surprised as she favorably appraised the dish at Washington's Occidental Restaurant, a popular establishment a stone's throw from the White House.

Hers was one of many such plates served up Wednesday by chef Rodney Scruggs, who helped organize an event to promote the culinary possibilities and ecological advantages of feasting on insects. (More: Of course we don't want to eat bugs. But can we afford not to?)

Among the exotic fare on offer were crispy barbecue mealworms and scorpion lollipops. Local pest control company Ehrlich sponsored the event in Washington, but the organizers said similar food samplings were being held Wednesday in 11 other countries, without further explanation. While munching on insects may be unappealing to some, the company touted bugs as the food source of the future, both plentiful and packed with nutrients like iron and calcium. (More: Why insects can be the future of food.)

Listen to the latest songs, only on JioSaavn.com
"The consumption of insects has been known to contribute positively to the environment and to health and livelihoods," the pest control company said in a statement, touting insect-eating as a way not only to boost nutrition, but also to reduce our carbon footprint. "More than 1,900 species have reportedly been used as food. Insects are high in protein, B vitamins and minerals like iron and zinc, and are low in fat." (More: Why should we eat insects?)
Worm and cricket lollipops
In honor of its 85th anniversary, Ehrlich pledged to donate $5 for each brave soul who sampled the food to a local food pantry for homeless people. They also are ecologically beneficial: A company representative at the food tasting pointed out that kilo of insects takes one-tenth the energy to produce as a similar amount of beef.

CommentsMary Than needed no hard sell. She was already convinced of the benefits of bugs, having grown up eating them in her homeland of Laos. "That's what we put in our food," said Than, a restaurant owner, as she tucked into a plate of fried worms and grasshoppers. Her dining companion and countryman Deth Khaiaphone agreed. "It's delicious," he said. "It's very nutritious, it's healthy, it's less processed."
In Pictures: A look at everything that was served at this insect-feast.