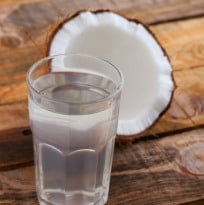 (What's In It?)
When coconut water broke into the U.S. market 10 years ago, it was billed as a miracle drink able to fight viruses, kidney disease and other ailments like osteoporosis. Global sales now reach $400 million a year, and many consumers believe that the beverage has a wide variety of health benefits. But they may be unaware that the drink's marketers have sharply scaled back their claims.

Young and Green
Not to be confused with coconut milk (the milky-white liquid made from coconut meat), coconut water is the clear fluid from young, still-green coconuts, packaged in angular Tetra Paks, as well as in bottles and faux coconut shells.

Essential Elements
The minerals in coconut water are what prompted the early claims of curative power, but their amounts are quite modest and they are widely found in other foods. A banana, for example, has 422 milligrams of potassium, compared with 660 milligrams in a typical container of coconut water. The water's big three minerals are potassium (19 percent of the daily recommended intake), calcium (4 percent) and magnesium (4 percent).A Sports Loss
Vita Coco, a leading brand, once boasted that it had 15 times the electrolytes - substances like sodium and potassium that are lost in sweat - in sports drinks. Then a 2011 class-action lawsuit contended that some of the mineral sums on its packages were exaggerated; as part of a settlement, Vita Coco agreed to stop saying that it rehydrated better than sports drinks. "We don't try to compare ourselves to much of anything anymore," said Arthur Gallego, the company's publicist.

One Last Comparison
These days, coconut water's big rival may be plain old water. How do they compare? Scientists are still wrestling with the question, and while their findings vary, water is starting to look just fine for most people. A 2012 study (funded by Vita Coco) in the Journal of the International Society of Sports Nutrition found that neither coconut water nor sports drinks were better than water in hydrating young men after hourlong workouts.

So What's the Appeal?
Coconut water taps into a "deep consumer vein," Tom Pirko, a beverage industry analyst, wrote in an email. "It is not seen as a 'manufactured' concoction, but rather the issue of Mother Earth." And it seems poised to become just the first in a wave of natural waters; already for sale are bottled waters from maple and birch trees, barley, cactus and artichokes, with their own exuberant promotions.

More Than a Drink
Meanwhile, coconut water flows on. Best-selling cookbooks are using it as an additive in soups and smoothies. And it's not just for drinking: Dial has released a soap and a body wash that use coconut water as a hydrating agent - and as a powerful image on the package.