Crazy Coffee Concoctions Around the World 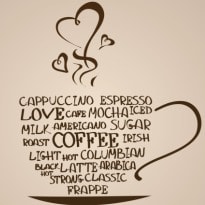 Mocha, Latte or for that matter our very own authentic filter Kaapi is the way to go for me.

From the homely, milky versions to the contemporary hits like the decaf - it is true that there are as many coffee versions and flavours available in the market. If you happen to be an enthusiastic foodie who pushes boundaries with ingredients, then who knows, you can just arrive at something new with your daily cup of coffee! (More: 10 Things You Didn't Know About Coffee)

The world brews up its own (weird) concoctions

You'll meet people from across the globe who will blend together their own secret ingredients to serve you an unbelievable cup of coffee. While reading on how coffee is brewed and served all around the world, I was taken aback to learn about some of the local versions. Just a few years back, the New York Times food editor, Sam Sifton tweeted about a Swedish concoction that had the town talking. This rather unusual combination is called Kaffeost - cheese made of reindeer milk, mixed with coffee and served. (More: What does your coffee say about you?)

Kaffeost: Image via Pinterest/naturfoto
The Scandinavian version is rather more than unusual. Some of the Nordic countries from the Scandinavian region sip on their coffee mixed with egg shells and at times egg whites as well. The science behind this mix vouches for an enhanced flavour that's free of sediments, a calcium boost as well as a rich and shiny colour.

Not to mention the craze a Taiwanese chain called 85°C Bakery and Café stirred after introducing their exclusive 'Salted Coffee'. Traditionally, it is believed that adding a little salt cuts through the bitterness of coffee. Who knows how much of it is true but one thing that is undeniable is the popularity of this coffee in Taiwan where the chain outshines even Starbucks. (More: Filter coffee: the return of a has-bean)

Experimenting with coffee isn't a new thing. Adding honey, cream, ice-cream, cinnamon, nutmeg, jaggery or chocolate to it is just so passé. You now have delicious versions that are laced with exquisite liqueurs like Irish whiskey, raspberry liqueurs, exotic spices and so on and so forth. (More: This column will change your life: coffee and creativity)

You can see coffee experiments everywhere. From fitness freaks who have their morning coffee with almond, coconut or soy milk to people like Phronk who give food experimentation a brand new definition. He's known to combine coke with coffee and going absolutely berserk and trying out blood sausage with coffee. I wonder why he does so. The answer is found on his blog, he says,

"I drink coffee every day, but get bored with the same old cream and sugar. I figured I might as well document my experiments for the benefit of all humankind."

Image via Phronk at puttingweirdthingsincoffee blog
One of the latest additions to the experimental coffee club is adding butter to your coffee. The trend sparked off with a video where a United States based life-hacker and tech investor Dave Asprey demonstrated how to make butter coffee. (More: Coffee: How Cold-Brew Became the Hot New Thing)

The concoction is known as Bulletproof Coffee which includes Bulletproof Upgraded Coffee, butter from grass-fed cows and brain octane oil. Describing the coffee, Dave Asprey says, "It makes for the creamiest, most satisfying cup of coffee you've ever had." The coffee is said to be a power drink that can act as a meal replacement option. The ingredients to make this coffee are incredibly specific and no, you can't use your everyday salted butter and cheap coffee.

Traditional way of making Tibetan Butter Tea: Image via Pinterest/Zennubian 7 Teahouse
In my opinion, butter coffee can be a concept borrowed from the Tibetan butter tea called Po Cha. Female yak's milk is used to make butter which is cooked with black tea or Tibetan brick tea, milk and a little sea salt. Tibetans as well as those living in parts of the Himalayas and Nepal drink this beverage to battle the chill of high altitude and stay energetic throughout the day.

Promoted
Listen to the latest songs, only on JioSaavn.com
Tibetan Butter Tea: Image via Pinterest/yowangdu
Whether any beverage of the similar kind can be of any benefit to people living around the world is debatable. As for now, many food critics and enthusiasts have excitedly tried butter in their coffee - and not much to my surprise - most have struggled to finish the mug full of buttery experimentation with much dissatisfaction. Others though, are more than happy with the buttery brew.

For me, nothing can ever replace the goodness of a wholesome meal. The sole purpose of food is to provide nutrition to our body and delight to our taste buds. Food experimentation is just an extension and example of man's inquisitive nature. If butter coffee is where we are heading with one of the simplest, heartwarming, soul-stirring beverages, I'd rather shut out the world to go back to the traditional coffee steaming in my faded mug.