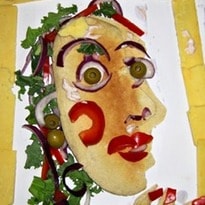 The old adage that we eat with our eyes appears to be correct, according to research that suggests diners rate an artistically arranged meal as more tasty - and are prepared to pay more for it.

The team at Oxford University tested the idea by gauging the reactions of diners to food presented in different ways.

Inspired by Wassily Kandinsky's "Painting Number 201" Franco-Columbian chef and one of the authors of the study, Charles Michel, designed a salad resembling the abstract artwork to explore how the presentation of food affects the dining

"A number of chefs now are realising that they are being judged by how their foods photograph - be it in the fancy cookbooks [or], more often than not, when diners instagram their friends," explains Professor Charles Spence, experimental psychologist at the University of Oxford and a co-author of the study.

Thirty men and 30 women were each presented with one of three salads containing identical ingredients, arranged either to resemble the Kandinsky painting, a regular tossed salad, or a "neat" formation where each component was spaced away from the others. Seated alone at a table mimicking a restaurant setting, and unaware that other versions of the salad were on offer, each participant was given two questionnaires asking them to rate various aspects of the dish on a 10-point scale, before and after tucking into the salad.

Wassily Kandinsky's 'Painting #201' and the salad it inspired. Photograph: Courtesy of the journal Flavour

Before participants sampled their plateful, the Kandinsky-inspired dish was rated higher for complexity, artistic presentation and general liking. Participants were prepared to pay twice as much for the meal as for either the regular or "neat arrangements".

After polishing off a portion, participants also rated the Kandinsky-esque salad higher for "tastiness", despite it receiving similar ratings to the other salads for the four basic components of taste: salty, bitter, sweet and sour.

But teasing apart exactly which aspect of the salads' presentation affected how much participants were willing to pay for a dish, and their perception of its "tastiness", is a tricky business. The authors suggest that the perceived effort involved in preparing the plate and its aesthetic appeal could be among the factors influencing participants.

"Here we know that expectations were raised [with the Kandinsky-eque salad] - that led to the willingness to spend more and to an increased experience during consumption," says Dr Katherin Ohla from the German Institute of Human Nutrition, who was not involved in the study. "But we don't know exactly what led to this raise of expectation."

Published in the journal Flavour, the authors believe the study adds to a growing body of evidence that the appearance and presentation of food can affect the dining experience. "[But] this is one of the very few studies that really used a full meal and in particular the only one that used a truly artful arrangement," says Ohla.