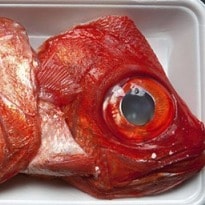 Many Brits have embraced nose-to-tail meat-eating, yet still stick to fillets when it comes to fish. But what about liver, tongue and roe - or even sperm?

I have a friend who regularly asks his fish to be returned to the kitchen if it's still "looking at him". And he's far from alone - for an island nation, Britons are still very squeamish about fish, particularly those bits that other cultures regard as delicacies. We're just about comfortable with a nice fillet, but not many people are keen to get their hooks into livers, tongues, fins or heads.

But might the nose-to-tail revolution that chef Fergus Henderson started with meat in the 90s work similar wonders for fish?

"Fish offal is consumed readily in France," chef Michel Roux Jr points out. "My favourite is probably cod liver. I also like to use cod tongue and throat." Monkfish liver is popular in Iceland and Spain, and has long been a delicacy in Japan (called ankimo), served in miso soup or steamed.

In Norway, cod tongue is extremely popular. In Portugal, fish-head soup is a national dish, and the same ingredient is frequently served in curry sauces in India. In China and other parts of east Asia, every little bit of the creature is used, from fish lips braised in sauce to the skin, deep-fried and served as a side dish in noodle shops. Intestines are steamed with egg, and bones are used to make stock.

But in the UK, we're lagging behind. It wasn't always thus: as Roux Jr points out, fish offal "was commonly enjoyed in the UK in medieval times, but seems to have gone out of fashion". Indeed, there may be some work ahead to erase negative childhood memories of being force-fed cod liver oil for its high level of vitamin D. As chefs are keen to point out, the fresh version of fish liver is far more palatable.

At Seahorse, his restaurant in Dartmouth, fish chef Mitch Tonks pan-fries monkfish liver with shrimps or leeks and cream, or serves it cold with sweet peppers and chilli. "It is regarded by chefs as the foie gras of the sea because of its soft creamy texture and slightly saline taste, which is unique and delicious," he says. "But there is a general squeamishness about fish in this country, which makes people shy away from offal such as monkfish, mullet and cod livers."

Herring and cod roes are becoming increasingly popular, thanks to chefs such as Hugh Fearnley-Whittingstall, who uses them in pâtés and spreads. And why not? Caviar consists of stugeon roe, and the roe from grey mullet or tuna is Sicilian caviar (bottarga). If it is from carp and mixed with bread and olive oil, it's taramasalata. Most of us are happy to stick a tub of that in our shopping basket - but we tend to steer clearer of fish sperm (also known as milt or soft roe). In the Japanese delicacy shirako (literally white child), the milt is often served in its sac with ponzu sauce. In Sicilian cuisine, tuna milt, or "lattume", is used as a pasta topping.

EU member states have just signed up to an agreement to phase out fish discards at sea, in a move to protect dwindling stocks. The least we can do is to stop throwing out perfectly edible bits of the fish that are caught. According to Sonny Elliot of sustainable retailer Rockanore Fisheries in Hastings, as things stand in the UK, nearly half the weight of the catch landed is thrown away. "If we're filleting 100kg of cod, nearly 50kg of heads, guts and bones ends up going to landfill," he says. "Occasionally people ask for bones to make stock, but mostly they just want flesh."

But there are small signs of a sea change in restaurants and at home, as people start to cook and eat more adventurously. Yashin Ocean House, a new seafood restaurant in London, serves up deep-fried fish spines. At Yum Yum Ninja in Brighton, set menus regularly include fish-head soup, while its nose-to-tail philosophy extends to shellfish, with waste such as scallop frills dehydrated and ground for seasoning.

Online fishmonger the Fish Society sells livers, cheeks and "fin ends" (offcuts and leftovers). A couple of years ago, fish heads were added to the site, and they were soon outstripping sales of fish such as whiting. Fish heads are a cheap source of nourishment and can be turned into a great meal - use them whole or split in stocks, soups and curries or, if you prefer, remove the surprisingly ­sizeable amount of flesh after simmering for 20 minutes and add to dishes.

It's high time we tackled our fishy phobias head-on.

Photo: Fish heads are a cheap source of protein and make a great soup. Photograph: Alamy