Is your child a fussy eater? Here's what NOT to say 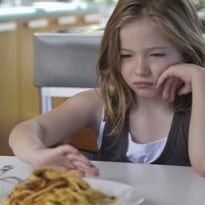 There are platefuls of power and attention to be gained from not eating something. So if you want to avoid tantrums around the dinner table, resist the urge to utter the following sentences...

So Britain's most hated vegetable has been reinvented just in time for Christmas. Waitrose has been working secretly with farmers to produce a sweeter, nuttier brussel sprout that, they say, will win over even the pickiest of kids. Bah humbug! Leave them on the shelf, I say - along with the chicken dinosaurs, the cheese strings and the squeezy carrot in a pouch. The last thing we need is another product that makes fussy eating the focal point of the family dinner table. Even if they do get a few greens into your kids on the 25th, the message behind them is detrimental: I can't eat normal food like the grown-ups thinks the child. I have special requirements.

The secret, I discovered, is to do the very opposite: take all the focus and attention away from what your kids are and aren't eating.

Truth is, you can't make children unfussy. No amount of commands, nagging, cajoling, tellings-off or bribes will do it. In fact, it has the opposite effect. The more you say, the more you show you care, the more you give them something to react against. It's an open invitation to battle. See that slight twinkle in their eye, that hint of smugness at the corners of the mouth? Oh yeah, they soon twig that there are platefuls of power and attention to be gained from not eating something - even if they quite like it.

My tactic was simply to keep presenting my kids with a wide variety of meals and foods and say nothing. Ever. It's an approach that takes willpower. You may have to bite your tongue until it bleeds. You may even start to develop tics and twitches at the dinner table from all the holding back. But it can work wonders not just to prevent, but also - with a little time - to undo fussy eating.

Here's eight of the most commonly said things that would be better left unsaid.

They've eaten everything else on their plate but the broccoli is just sitting there, untouched, going cold and limp before your eyes and screaming at you to tell them to eat it. Don't do it. You have more chance, not less, of them choosing to eat a food if you don't tell them to - and not just in the short-term. A study of university students whose parents had insisted they ate a food as a child found that 72% of them now didn't eat that food. It emerged that they perceived the parent as the "winner" and themselves as the "loser". Now that they'd left home and it was up to them, they chose to "win" by not eating it.

Using pudding as a bribe or a threat trips off the tongue like runny custard drips down the chin. We know most kids will do anything for a sugar hit. But not only are you showing your desperation, you're giving them a thoroughly unhelpful message: eating the savoury bit is a chore. Unenjoyable. Something you just have to endure to get to the sweet bit - which is flippin' delicious and the bit worth getting to. It's subconscious, but it's loud and clear.

Your voice may be light and playful and encouraging, but you might as well be screeching "EAT IT! EAT IT! I really want you to EAT IT!" Save praise for the tricky or boring things in life like learning to tie your shoelaces or memorising your nine times tables. Eating isn't hard. It's our most basic instinct. And a pleasure. The reward for eating is eating: the tastes on your tongue, that feeling of a nice full belly.

You can't win either way. Tell them they like something ("Why aren't you eating your sausage? You love sausage") and they won't eat it. Tell them they don't like something ("You want lettuce? I thought you didn't like lettuce") and they'll stop eating it. Not only are you putting them in a position of power, you are solidifying their mental list of Foods I Will Never Like. You want to keep an air of "fluidity" around food, where just because they've turned their nose up at a food 10 times - it does not rule out the possibility that they'll fancy it another day.

Fish is good for your brain, pasta gives you lots of energy, oranges are full of vitamin C. All true. All useful to know. But this is just a more indirect way of initiating a power struggle. Kids absolutely need to learn about healthy eating, but the dinner table isn't the place for it. Would you react well to a lesson on why getting a good night's sleep was important just as you were settling down to sleep?

"I don't care if you don't eat it. I just want you to at least try it"

Top of the list of Things That Drive You Crazy About a Fussy Eater must be when they decide they don't like something before they've even tasted it. Nothing like that to bring out your competitive instincts (I'll get one mouthful in them if it kills me). Back off. Breathe. Unclench your fists. Kids are naturally curious creatures - even about food. Remember how they used to want to try an anchovy off your pizza or dip their finger in the mustard? But there's way more mileage for them in going in the opposite direction if it's going to make you that mad.

"The parsnips are really yummy. Mummy loves them"

More subtle, but nevertheless, heard simply as "Pleeeease eat some". Be a good role model by all means. Eat your salad. Try new things. Don't have cake for breakfast. But don't point it out to them. Let it work by osmosis.

"You're such a fussy eater!"

Even if you have a child who would choose to live entirely off pickled onion Monster Munch, never actually call them the F word. It gives them the perfect excuse: no one is expecting me to eat this. I'm a fussy eater. I can't help it. Don't let them catch you telling anyone else either. There are huddles of parents in school playgrounds and parks up and down the country venting their worries and frustrations about fussy eating. Join in by all means. It's great therapy. Just not in front of the kids.

Photo: You have more chance of your children eating their food if you don't tell them to eat it. Photograph: Altrendo Images/Getty Images