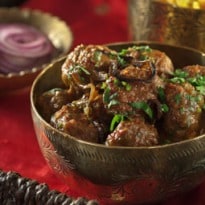 Whether kofta in India or köttbullar in Sweden, it seems that everyone, everywhere loves meatballs. What gives them their all-round appeal, and how easy is it to make your own?

Everyone loves meatballs. Almost every food culture has its own version - from Italy's polpette and India's kofta to Sweden's köttbullar and Vietnam's xiu mai. You could circle the globe via South America, North Africa and Asia, and try as many different meatballs as you gain passport stamps (hands up who wants to come on that trip?).

In Britain, we have our own take on the meatball - the faggot - but, as with so many dishes, we have also adopted those of other nations. In the past few years, the humble meatball has taken its rightful place, appearing on menus everywhere, and is now a main attraction at restaurants such as Polpo, Giant Robot and next month's new opening, Chop Shop in London. For a while there was even a dedicated meatballs restaurant, inspired by New York's successful The Meatball Shop chain.

There is also a street food van, The Bowler, and accompanying cookbook, published earlier this year. This summer The Bowler has been driving around the country, slotted to appear everywhere from society events such as Ascot and Polo in the Park at the Hurlingham Club, to festivals such as Wilderness, V and Camp Bestival. It seems there is no event that isn't improved by the addition of meatballs.

But it has not all been plain sailing for the polpette. Earlier this year the meatball hit the headlines for the wrong reasons, when Ikea's popular spheres were revealed to contain horse DNA. So if the horsemeat scandal got you buying better quality meat, why not take inspiration from the plethora of recipes around and master the art of making your own? You will be joining a rich culinary tradition. People have been rolling and shaping animal protein for millennia. There are meatball recipes in the Roman cookbook Apicius, including one using peacock.

Kofta have also been made in the Muslim world for thousands of years. The word is thought to originate from the Persian word kūfta, meaning to grind. They are made across the eastern Mediterranean and Middle East, with variations in spelling (koofteh in Iran, köfte in Turkey, for example), ingredients and accompaniments evolving over the years. Meatballs are believed to have been introduced to the Iberian Peninsula by the Moors - the Spanish name albóndigas may derive from the Arabic al-bunduq, meaning hazelnut.

As people have crisscrossed the globe, so too have meatballs. The Spanish and Portuguese introduced their albóndigas and almôndegas to the Americas. Polpette followed Italians to America in the 19th century, where they made carbohydrate bedfellows with spaghetti and bread (meatball subs). And Swedish migration to the Midwest in the same period popularised meatballs there. In Jerusalem, "meatballs are celebrated by absolutely everyone - traditional Jews, Christians, Palestinian eateries and funky fusion chefs," says Yotam Ottolenghi in his cookbook, also called Jerusalem.

So why are meatballs loved by so many? "There's a folksy and democratic nature to them," says Russell Norman of Polpo, which sells more than 25,000 polpette a year at its Soho branch. "They are down-to-earth, but pack a flavour punch, which is probably why they pop up in all cuisines."

"Meatballs hark back to childhood," says Jez Felwick, owner of The Bowler. "They remind you of having meatballs and spaghetti as a kid." This homely dish is economical, too - which may also explain its current popularity: "Meatballs were historically a way of stretching a limited supply of meat and filling it out with other ingredients," food writer Signe Johansen points out.

If you have never made your own, don't be daunted. "Meatballs are fun to make and very easy," says Spanish chef José Pizarro, who makes his with Iberico pork and a tomato sauce with orange zest, or beef and pork stuffed with blue cheese.

"There's no right or wrong way. Every culture has a different take," says Felwick. "Buy quality meat from a butcher you trust and get them to mince it. With ready-made mince you can get lots of liquid draining out."

And when it comes to flavouring, Norman advises you go easy. "We would never put more than two strong flavours into a ball. Stick to a principal and a secondary flavour and play around." Scandinavian meatballs are usually made with "medieval spices like nutmeg, all-spice and ground ginger," says Johansen. She suggests using "good-quality spices - grind the nutmeg yourself and you'll get a much better flavour."

You don't even have to use meat. Felwick calls his meat-free spheres "veg balls", while Norman prefers the oxymoronic but more elegant sounding "vegetarian meatballs". The former includes recipes for brown rice and red lentil, and courgette and asparagus balls in The Bowler cookbook, while Polpo's chickpea, spinach and ricotta balls are second in popularity only to its spicy pork ones.