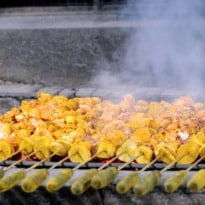 Bhujing was created at Agashi Bhujing centre in 1940 in an area called Agashi, next to Virar which is located on the outskirts of Mumbai. Though it's not well known outside of the Virar-Vasai area, within the area, its popularity is unparalleled.

Virar is one of the last stops on the Western line of the Mumbai Suburban rail. And Agashi is another 5-odd kilometres from there. I was told by a Mumbai local that the street food in Virar is quite unique and there is something called Bhujing there. Bhujing is prepared in many corners of Mumbai but the one at Agashi Building is where it originated and is still being prepared.

As I was in Mumbai for a few days and this sounded very exciting, I set out for Virar as soon as I got some free time. After an hour and fifteen minutes on a Virar fast train, I landed there. Not very sure of where to go, I took a chance and headed west. I started my hunt from the station but none of the auto guys or shop owners could guide me on where to get Bhujing. I thought maybe it isn't that common or at least not commercially.

Finally, one auto-wallah told me he would take me to a place which served this dish. This was after half-an-hour of soul searching and having eaten two very average vada pavs near Virar station. I was desperate by now and took the plunge. After traveling 10 odd minutes in the auto, I was having serious misgivings. Where was this guy taking me?

It did cross my mind at this moment that there's a good chance I might be getting kidnapped  but I kept my fingers crossed. The good thing was that the scenery on both sides of the road was quite stunning. And the auto wallah was a rather sweet guy and the scenario didn't quite give the feel of real kidnapping.

This was Mumbai alright, but very unlike regular Mumbai, the glitz and glam of Bandra, the young and cool of Lokhandwala, the business talk of Nariman point, the chawls of Mazgaon or even the shanties (slums) of Kurla were missing. Instead, there was a rather unusual scape of beautiful green paddy fields and a stunning mountain scenery in the horizon. But this was also Mumbai. I could feel it. It might have been just a little less cosmopolitan but it had the same madness and chaos. Lots of Gujaratis, East Indians, Marathis, the Fisher folk and others who are part and parcel of Mumbai's social fabric.

Finally the auto-walla stopped. The board in front of me said 'Agashi Bhujing Centre'. I was there and was so very excited. But the cold reception and unwillingness to let out any information came to me as a surprise. And honestly, it was heartbreaking. All of this for nothing. I was disappointed but wasn't prepared to quit just yet and so I probed on. Finally the person at the counter directed me to what he called their workshop in the back area. Here I encountered a kind and sweet person who was cooking chicken on a huge charcoal pit. He welcomed me warmly and showed me around.

Agashi Bhujing Centre
The kind man took me through the entire process of how Bhujing is prepared. As I understood it, the chicken for Bhujing is roasted, and some cut potatoes are added to it and then both fried and steamed with onion. Then it's mixed with nylon poha or flattened rice and a special masala mix.

I know this sounds complicated, so let me explain a bit more in detail - The chicken is cut into small pieces and is first dry marinated along with some cut potatoes and a spice mix of jeera (cumin), turmeric, salt, coriander seeds and sliced potato. It's then skewered and cooked on charcoal. After that, it's cooked again with a little bit of oil and sliced onion in a vessel that's covered with a thali with water on top. This acts almost like a combination of steamer and fryer.

This process leaves you with cooked chicken that is still moist and juicy. Then it's mixed with a dry ground coarse powder of cinnamon, cardamom, cloves, garlic, green chilly and dry coconut. And finally, the nylon poha, that's supposed to be the best quality of poha is mixed with the cooked chicken. The end result is truly exceptional and definitely worth the long train ride. Sometimes I still crave Bhujing in my dreams.

About The Author:
Chowder Singh started blogging in November 2011 on Indian street food, small restaurants and hole-in-the-wall kind of places that in spite of producing brilliant quality food, are largely unrecognised outside of their localities. He believes that these are the real heroes of Indian food, who have been consistently putting out their family recipes over many years and now will hopefully get more recognition for the superb work that they've been doing.

Promoted
Listen to the latest songs, only on JioSaavn.com
More articles from Chowder Singh:

The Discovery of Chennai's Most Unusual Street Food
The 160 Year Old Square Naan of Hyderabad
This Indian Sweet is Being Made for Over 225 Years!
Have You Ever Tried a Kala Burger?
Nankhatai - The Dying Indian 'Biskoot'