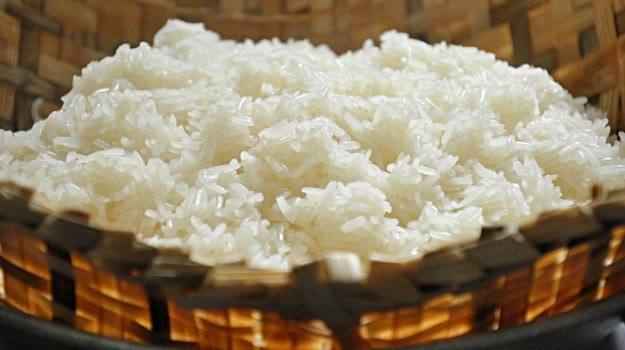 Someone I love called me a rice eater. I took that with a pinch of salt. Rice is such a versatile ingredient that it's hard to find any other grain as unique as rice. And harder still is not to be obsessed with this wonder grain. Particularly, for Northeast India, rice is not just a staple diet but an integral part of every community's culinary idiom.

Through the region, rice is revered and relished not just in its traditional method of preparation: steamed and boiled, but in many varied ways. Rice is in fact, what binds them together. It is an unseen thread that runs through each region and brings them close in an intrinsic manner.

Flattened rice ladoos are another popular sweet savories in Imphal. Puffed rice is mixed with jaggeries and made into small balls and relished. Local markets are full of such savories.

In the Northeast, it is still a given thing to grow one's own rice. So, to those with means and land, they would rather grow rice of their choice. And there are varieties out there! So, most houses will have their own granaries that stock rice to last an entire year. For instance, our wooden granary back home in Manipur is always full. The rice comes from our own paddy field. In olden days, it was considered that once a family has a stock of rice in their granary, they are ready to face any calamity. Today, people fill their granaries not so much with that thought but more so because they are so accustomed to the distinct flavour of their own home-grown rice.

(A Simple Trick to Reduce Calories in Rice by Half!)

That explains why we do not buy rice ever from the market. The short grain rice that come from our paddy field has a distinct fragrant that can match a good quality basmati. Sticky rice is a little difficult to cultivate. But that does not prevent us from buying this. And it is with this sticky rice that we often try our hands at making traditional snacks, which incidentally is common among many communities in the state.

Sticky rice is first dried and then pounded to make a coarse powder. At this stage, it can be either sweetened or salted, made into a dough, shaped into desired sizes and wrapped either in banana, plantain or turmeric leaves. Turmeric leaf imparts a sweet flavour which is why it is used for such preparations. The wrapped dough is then steamed and what comes out of the steamer is a sticky rice cake which is called tanghou or sangh man. The process is quite tedious, which is why back in the olden days, it was prepared only on special occasions. It is not so today, as people prepare it a lot more frequently.

(Also read: One of The World's Spiciest Chilli Grows in India!)

Besides, local markets stock fresh tanghous. The cake can be eaten just like that with tea or it can be deep-fried to get an altogether different flavour. Even the Tangkhul community who call this manui chat (sticky rice), flip for this snack. They sweeten the rice powder and make puris. Sometimes they also use tender bamboo hollow and stuff rice into it with water and close the lid with leaves and roast it in fire. It's eaten as snacks round the year.

When Meitei Brahmins prepare kheer out of local rice, it is to die for. They whip up the preparation with dry and fresh fruits, and it is only then that the rice is altogether elevated

It's interesting how the very same rice finds a different interpretation in another state like Sikkim. Ever since my friend Yishey Yongda introduced me to zhyero lovingly prepared by her mother, it's hard to get off the snack. So, it is zhyero or zero all through the day for me. At first glance, the entangled strings resemble a delicate bird's nest or, the crispy vermicelli that are reminiscent of the Karva Chauth diet.

Again, zhyero is made of rice flour which is first finely powdered. It is like entangled thin strings or wires and specific to the Bhutia community of Sikkim. There will never be a Bhutia home without a stock or reserve of zhyero, as it would mean incompetency of the lady of the house.

Nothing beats Sikkimese Zhyero with tea

Sel-roti is another rice-based savoury exclusively from the Nepalese kitchen in Sikkim. It is sweetened rice bread that looks like uneven doughnuts. It is made of rice which is powered and then soaked with different condiments including sugar to make a batter. The consistency of the batter makes all the difference and the preparation is somewhat similar to preparing jalebis as it needs a swift hand to ensure the batter takes shape. When there are heaps of sel-roti in their homes, know it's to herald a festival.

And what my Assamese friends make of their rice is even more interesting. They prepare bora saul or pitha during Bihu or other auspicious occasions. The sticky rice is boiled and taken as a snack (jolpan) with milk, jaggery and curd.

(White, Brown or Red: Which Rice is the Healthiest?)

Putharo, a special kind of snack, is also made from sticky rice flour - the Khasis and Jaintias of Meghalaya have this with tea. Sticky rice is also cooked in an earthen pot without any condiments over slow wood fire in many homes. But nothing quite matches what my Naga friends prepare with rice that often reminds me of khichdi. But not quiet as the flavour is something unlike a khichdi. It's called galho and the flavour comes from assorted greens cooked together with dried meat and herbs.

The Mizo call it buh ban for sticky rice (buh means rice and ban means sticky) and they keep experimenting with it. These days, they make flimsy rice cakes which are definitely a modern interpretation. When this steamed rice cake is deep-fried, it reminds one of prawn crackers. Some tribes of Tripura call it auwan or gurian maira.

Equally revered in every kitchen in Tripura, sticky rice finds a different yet interesting method of preparation where the grain is washed and wrapped in banana leave and steamed. It comes out like a cake and then it is taken with a traditional dish called chakwi, which is a bamboo shoot-based dish.

Rice in Arunachal Pradesh has an altogether different interpretation. It is used to prepare their traditional rice beer called apo or apung. The trick here is to use fermented rice which gives that punch.

With so many interesting preparations across various regions, being called a rice eater is something I now take as a compliment!

Disclaimer: The opinions expressed within this article are the personal opinions of the author. The facts and opinions appearing in the article do not reflect the views of NDTV and NDTV does not assume any responsibility or liability for the same.