The Anti-Inflammatory No One Told You About 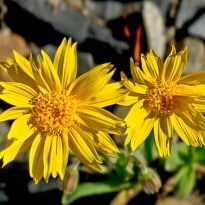 How many times have you found yourself with a nasty looking black and blue bruise and very little patience for it to heal? Or you've badly pulled a muscle in a quest to keep fit and are itching to get back on your feet quickly? Well look no further, for the remedy lies with nature itself.

It's an innocent looking thing; a pretty, orange-yellow, daisy-like flower - one of the members of the sunflower clan. Most commonly known as Leopard's Bane, Arnica Montana is a flower that packs more punch than you could ever imagine.

It was used by Native Americans to treat muscular problems such as sprains. It was prescribed for pain relief for dislocations, bruises, and also used as an antiseptic for wound and insect bites. 19th and 20th century European doctors also commonly used Arnica in much the same way.

So although people have long sworn by this magical flower, it's really the fashionable lot that has re-catapulted the usefulness of Arnica in recent years. A natural anti-inflammatory, Arnica has been used to relieve muscular aches after fitness classes.  Its anti-bacterial properties can bring down swellings, black-blue bruising and bleeding after surgeries of all kinds.

It's also very popular with catwalk models who use it to relieve internal inflammation, flush out toxins and for glowing skin. Sports medical experts also hand out Arnica to speed up recovery of bruised, sprained and even fractured players. It can also provide relief from and act as a preventative against cramping.

So How do You Use Arnica?

Available in homeopathic pellet form - where the tincture is diluted, often into a base of acacia gum, and the tiny pellets simply dissolve in a moment under the tongue. This form is best for those looking to heal post-operative pain, muscular aches, sprains, bad bruises, and even contusions. Many swear by these pellets to relieve vertigo and car-sickness, as well as cure acne and skin inflammation.

Arnica gel and cream preparations combat external swelling, inflammation, and insect bites and rashes on the body. But it must not be applied directly to open wounds. Specifically marked topical creams can be used to clear the skin of acne.

It's also available in a variety of shampoos and conditioning treatments, which aid in stimulating hair growth and prevent dandruff. Arnica is also a preventative against premature hair-greying.

Tinctures of Arnica are used to cure throat infections; and are taken by those with low-blood pressure or those suffering from motion-sickness. This form must be diluted in water before ingesting. The flower is indigenous to North America and Europe, and is also cultivated in North India.

A Few Warnings You Should Know About

Arnica works by stimulating the body's white blood cells, increasing stimulation and thereby reducing the amount of healing time (often dramatically). It does however contain the compound Helenalin, which is toxic if consumed in large quantities.

Promoted
Listen to the latest songs, only on JioSaavn.com
Arnica should also be avoided by those who are pregnant, as well as those who suffer from high-blood pressure, as it can over-stimulate their heart rates.

Many chemists do carry Arnica, it is widely available as an over-the-counter to purchase. And for those who are either slightly more accident-prone or have rough and tumble kids, it's definitely a must-have for the medicine cabinet.