The British Appetite for French Cheese 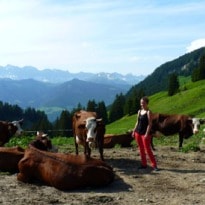 The UK's love of French cheese is growing, with almost 115,000 tonnes imported last year. Sandra Haurant went to the Alps to see how one traditional variety is made.

In winter, while the cream of French society skis down the snowy pistes of Megève in the French Alps, La Ferme de Joseph's herd of cows wait out the cold in a cowshed in the valley beneath the ski slopes, where they stay from October until May.

Come late spring, most of the snow has been replaced by lush grasses and flowers. Finally, the cows from the farms around the Haute-Savoie village can get back up to the mountain, and producers can start to make the best cheese from their rich milk. Usually the move to alpage (mountain pasture) happens in May, but this year, harsh weather meant it was mid-June. The cows are let out to graze in the fields close to the farm in the valley first, before being moved up to their summer home a few weeks later.

When the time comes, the herd is walked up the mountain, cowbells clanging, by the farm's owners, friends and family. It takes about three-and-a-half hours to reach their summer grazing land, says Judith Devillaz, niece of Joseph Socquet, owner of La Ferme de Joseph. "There's a festive atmosphere about it. The cows are pretty excited at first, and we have to run to keep up with them. But after a while, they realise there is a bit of a way to go and slow down."

I can see their point. Our journey, in a four-wheel drive, starts on the smooth roads at the outskirts of this medieval alpine village, but soon we are on a rocky, hair-raising track, snaking up the mountain to reach an altitude of almost 1,700 metres. The fourth generation of this farming family, Devillaz knows the cows, and this particular stretch of mountain road, by heart. "I first took the wheel up here when I was 10," she says.

Now she navigates the steep, narrow track with ease, crosses a ford and takes us to where the views are more spectacular and the grass really is greener. And there are the cows, brown and white "abondance" cattle. When we reach them it is about 30C, the sky is deep blue above the peaks and pines, and the grass is a saturated green. A waterfall, distant hillsides with the odd chalet and countless snowy mountaintops make up the panorama.

There are around 60 dairy cows. They are milked twice daily, and the rich alpine milk is stored overnight in a water-cooled container before being carried down the mountain in the morning. Most of the milk is taken to a cooperative to make cheeses such as beaufort, emmental, abondance and reblochon. Production in the cooperative is small and its products are not exported. But the UK's appetite for cheeses such as these is increasing. In 2012, almost 115,000 tonnes of French cheese were exported to the UK. Of that, just under 2,995 tonnes were "pressed cooked" cheese, which includes abondance, comté, beaufort and emmental - up from 1,631 tonnes in 2000.

Abondance is made using techniques said to date back to the 12th century. A firm, pale cheese with a yellowy crust, it has a delicate taste and is matured for a minimum of 100 days. Beaufort, like abondance, is an "appellation d'origine contrôlée" cheese, with very strict rules on, for instance, the breed of cow, where they graze and how the cheese is matured. Creamy beaufort d'été (summer beaufort) must be made from unpasteurised alpine milk produced between June and October, when the cows graze on the rich mountain grass and flowers. Beaufort d'hiver (winter beaufort) is made when the cows are in their sheds and the milk is less rich. Beaufort d'alpage must come from cows milked by traditional methods at altitudes of at least 1,500 metres - and all from one herd.

Raclette, a Savoie classic made in Switzerland and this region of France, is one of the mainstays of winter cooking, grilled and served with potatoes, cured meats and salad. Kate Wallace from Waitrose says that sales are up 16% year on year and adds that: "Smoked raclette is also in demand as people look for something new and unusual for dinner parties."

It is also becoming a takeaway favourite at food festivals and markets. Bill Oglethorpe owner of Kappacasein has been selling his own raclette at London's Borough Market for 12 years. Half a large cheese is held in a wheel and melted slowly, and a big scrape is served on new potatoes along with gherkins and pickled onions. "I have adapted the dish to the takeaway market, and it sells extremely well. I sell about 110kg of melted cheese a week," he says. And although many of Oglethorpe's customers are French and Swiss people with cravings for home-comfort food, his Ogleshield raclette is made in Somerset.

But although there has been a rise in artisan production and quality products in the UK, Britons are still apparently in love with cheeses of alpine origin. "Alpine cheese is definitely a strong trend, with comté, reblochon and beaufort all selling well," says Wallace. "Our customers love the stories behind each cheese, and more unusual variations of milk and traditional methods of production are certainly becoming more fashionable."

Michael Lee, managing director of Yorkshire-based Fine Cheeses Ltd, agrees that interest in French cheeses has continued to rise over the years. "People are trying new things while they are on holiday, and looking for those tastes at home," he says. "The French are very strict on how they make their cheese and, of course, they think it's the best." Lee also points to the quality and diversification of British cheese, and it is true that it is gaining in reputation - sales of British cheeses have even been growing in France - but it remains a niche. Devillaz is curious about British cheeses, but while she is politely dismissive of the cheddar she has tried, she has not really come across much else. And with cheese as good as this at home, it is easy to understand why the French don't look further afield.