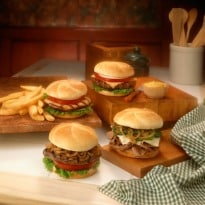 Pune seems to be having an affair with burger joints, yet just a couple make the mark. Ashishwang Godha went on a food trail to prepare a checklist of the best and the rest.

The ambience at Burgers and More may be nothing to write home about but they serve some of the city's best burgers. The bun is perfectly soft-yet-crisp and holds together a delicious range of patties. With over 40 burgers on their menu in veg and non-veg options, they never repeat a patty or a sauce. Cooked fresh and fast to deliver, Burgers & More strives hard to break the notion that fast food is junk food. They don't shout it out but they have signature eggless sauces, zero trans-fat French fries (the crispiest in the city), non-hydrogenated oil and perfectly maintained and cooked meats. We are fans of their Veg Spicy (Rs 55), Chicken Fusion (Rs 80) and Meat Overload (Rs 120) burgers. Whether you love bacon, salami, egg (or all in one) or unusual veggie patties such as corn and spinach, they have it all.

At: Viman Nagar and Model Colony

First-views tell us they desperately need to up their hygiene. The floor is filthy and the kitchen staff equally so. Nonetheless, their products are average. We tried the Chicken Rancho (Rs 90), whose patty wasn't even warm. Our Mutton Twister (Rs110) had a smooth, well-minced patty that the dressing doesn't do anything much for. Instead, come here for the Chocasmic Burger (Rs 130) -- it isn't a burger at all but, we enjoyed the innovation. It is made of a big brownie, sliced into two, sandwiched within a slab of vanilla ice-cream and generously drizzled with chocolate sauce. Tastes good plus, a brownie point for novelty!

We've been driving past for three years and finally ventured in. A little hole-in-the-wall, they are all-vegetarian and serve only four burgers (sandwiches and pizza make up the rest of the menu). We opted for a Masala Veg Cheese Burger (Rs 55) and the single staff sauntered into the little black kitchen. Our patty was fried in a wok and the burger came wrapped in tissue paper. It was too bready a bun with lots of ketchup and a negligible touch of
mayonnaise but still, a respectable patty. The cheese was totally forgotten. They do offer a slightly better burger than some other burger joints of repute.

A high-end burger joint with 16 burgers on the menu, including beef, pork and unusual veg options. We tried a Mac N Cheese Bomb (Rs 180), literally a macaroni and cheese patty bread-crumbed and deliciously oozing. Among the non-veg options, we gave the Barbeque Lamb (Rs 179) a try. It was a crisp patty but with a sauce that didn't match. A good option for pre or post movie burgers. Do give their shakes as try; we highly recommend the Burnt Caramel.

If only they would have stayed true and improved upon their core concept of eggs converted into Stufflettes, they would have been quite a hit. Unfortunately, they now do all sorts of veggie and chicken burgers and not too well. While the Spanish Stufflette (Rs 49), a burger with potatoes in an egg omelette is quite alright, their Popeye Tikki, Mexican Roll and more are a sad deal.

Stay away from: Burger Barn

Promoted
Listen to the latest songs, only on JioSaavn.com
Our fourth time here and they've been consistently bad. We tried a Barn Mexicana Burger (Rs 90) - it came in its signature big bun, layered with a ketchup mix, a few tortilla chips and a chicken patty that was under-cooked. As we attempted to swallow, we saw a staff member touching the soles of his feet and touching the cutlery. The rest of the burger was rendered inedible.

At: Koregaon Park and Wanowrie