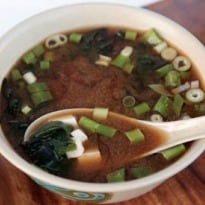 Japanese people are more likely to reach 100 years old than anyone else in the world, a fact that some researchers attribute to their diet. So, are they right - and is eating tofu and squid the place to start?

Can you eat your way to a century? I am not referring to test cricketers, I'm talking about the Japanese diet. Or the Sardinian diet. Or the Ikarian diet. Or any one of half a dozen regional, usually traditional, ways of eating that have been credited with keeping an improbable proportion of their populations alive beyond the age of 100.

Last week, the oldest man ever on record, Jiroemon Kimura, from Kyotango near Kyoto, passed away at the age of 116. His death, and the fact that the new record holder, 115-year-old Misao Okawa, is from Osaka, reminded us that the Japanese know a trick or two when it comes to living beyond 100. According to the UN they have the greatest proportion of centenarians in the world - and a great deal of that knowhow concerns diet.

I have long taken an interest in how I might eat myself to old age. I visited the southern Japanese Okinawa islands whose population is said to include the largest proportion of centenarians in the country and met with some of them in what is supposedly the village with the oldest demographic in the world, Ogimi, little more than a dirt street lined with small houses, home to more than a dozen centenarians. Old folk tended vegetable patches or sat on porches watching a funeral procession go by. My family and I dined on rice and tofu, bamboo shoots, seaweed, pickles, small cubes of braised pork belly and a little cake at the local "longevity cafe" beneath flowering dragon fruit plants. Butterflies the size of dinner plates fluttered by and my youngest son asked if there was a KFC.

The next day I interviewed American gerontologist, Dr Craig Willcox, who has spent many years investigating Okinawan longevity and co-wrote a book, The Okinawa Program, outlining his findings (recommending that we "Eat as low down the food chain as possible" long before Michael Pollan's similarly veg-centric entreaty).

Willcox summarised the benefits of the local diet: "The Okinawans have a low risk of arteriosclerosis and stomach cancer, a very low risk of hormone-dependent cancers, such as breast and prostate cancer. They eat three servings of fish a week, on average ... plenty of whole grains, vegetables and soy products too, more tofu and more konbu seaweed than anyone else in the world, as well as squid and octopus, which are rich in taurine - that could lower cholesterol and blood pressure."

Okinawa's indigenous vegetables were particularly interesting: their purple sweet potatoes are rich in flavonoids, carotenoids, vitamin E and lycopene, and the local bitter cucumbers, or "goya", have been shown to lower blood sugar in diabetics. Like most of us, I am familiar with mainstream dietary advice - eat less sugar, salt and saturated fat, cut down on the cronuts and so on - but I much prefer the idea of discovering little-known shortcuts to longevity; I'm more of a "silver bullet" kind of guy. With this in mind, over a lunch of traditional goya chanpuru - bitter cucumber, stir-fried with tofu, egg and pork - in a restaurant that was little more than a tumbledown hut close to his campus, I asked Willcox which elements of the Okinawan diet he had introduced to his life. Turmeric and jasmine tea, he said; both potentially ward off cancer. Needless to say, both now feature in my morning ritual.

Of course, your destiny as a potential centenarian will also be determined by your DNA, upbringing and temperament, as well as how physically active and sociable you are; the climate where you live; the standard of healthcare available; how relaxed you are about timekeeping; whether you take naps and are religious; wars, and so forth. Being born a girl helps: 85% of the world's centenarians are female. But it is generally accepted that diet determines around 30% of how long we live. Some argue it can add as much as a decade to your life. So, the question then becomes, should we all switch to a diet of tofu, sweet potatoes and squid?

According to Professor John Mather, a director of the Institute for Ageing and Health at Newcastle University, it probably wouldn't do any harm but the prevailing scientific evidence weighs more heavily in favour of the Mediterranean diet. "There is not enough research on people who adopt the Japanese diet in non-Japanese settings," he tells me. "It is true Japan holds the [longevity] record at the moment, but if you go back a little it was Sweden or New Zealand." (The Chinese have referred to Okinawa as the Land of the Immortals for centuries, but this probably does not constitute strong epidemiological evidence.)

Mather, who has worked in nutrition for 40 years, adds that the Nordic diet has made a late surge, with recent research pointing to the benefits of its fish- and, more controversially, dairy-rich diet (the latter is an anomaly in longevity diets: the Japanese eat little dairy, and in the Mediterranean diet it is mostly limited to cheese and yoghurt). But he still prefers to point to the well-documented longevity of the people of the Nuoro province of Sardinia or the Greek island of Ikaria, the latest destination on the fountain-of-youth trail.

Last month this newspaper reported that one in three Ikarians make it past 90. Among the dietary factors cited for their Methuselean tendencies are herbal teas rich in antioxidants (including wild mint, good for digestion, and artemisia for blood circulation), gallons of olive oil, plenty of fresh vegetables and little meat or dairy. The US's longest-lived community, the Seventh Day Adventists of Loma Linda, California, also eat a largely vegetarian diet, and the people of Costa Rica's Nicoya peninsula - another of the world's so-called "blue zones", places identified by longevity researchers where people live to a notably riper age - apparently eat large quantities of beans.

It is surely no coincidence that Ikaria only got its first supermarket three years ago, while, in contrast to the centenarians, the generation of Okinawans born since the arrival of the US airbase and its accompanying fast-food outlets have demonstrably declining health.

"All of these diets work on similar mechanisms," Mather tells me. "One hypothesis is that the secret about ageing is to avoid accumulating molecular damage, and eating fish, beans, nuts, seeds, legumes, whole grains, and not so much red meat, dairy or sugar may help us to reduce that kind of cellular damage." Sadly, the professor is dismissive of silver bullets: "In the early days we did try to link health with specific foods or nutrients, but now we look more holistically at dietary patterns."

According to some, those dietary patterns also include calorie restriction (CR) - simply eating less, even of the good stuff. Ikaria, Okinawa, Sardinia to an extent, and parts of Scandinavia, have all suffered from periods of food shortage and their traditional diets adapted to scarcity. Many now believe that reducing your daily calorific intake from 10% to as much as 40% below the western average can stall chronic diseases and boost immunity. Willcox advocated this approach - indeed, the Okinawan dinner time mantra, "hara hachi bu", means "eat until you are 8/10ths full" - but Mather is more sceptical. "If you are a mouse, it's good news," he says. "If you are a human there is really no good evidence about dietary restriction." In potentially encouraging news for gluttons, he points out that recent large-scale tests on rhesus monkeys have given conflicting results on CR: those at the US's National Institute on Ageing were healthier but lived no longer on a CR diet, while those at the Wisconsin National Primate Research Center saw a survival rate improvement of 30%. CR societies, meanwhile, point out that keeping monkeys in cages is unlikely to tell us anything about human longevity.

So, what have the Guinness World Records' oldest people eaten? Kimura recommended porridge, miso soup and vegetables. His motto "eat light to live long" certainly chimes with CR thinking. His successor as oldest person in the world, 115-year-old Misao Okawa, reportedly celebrated her new title with her favourite dish of mackerel sushi (an Osakan speciality, heavy on the vinegar). The oldest person ever to have lived, Frenchwoman Jeanne Calment, who died in 1997, aged 122, was a noted chocoholic who doused her dinner in olive oil and drank red wine daily. The man the Russians once claimed as their oldest, sawmill worker Magomed Labazanov, who died last year, aged an undocumented 122, recommended wild garlic. Britain's oldest person, 113-year-old Grace Jones of Bermondsey, is quoted as preferring "good, English food, never anything frozen" and enjoys a glass of sherry with friends from time to time. And Britain's oldest man, 109-year-old Ralph Tarrant smoked until he was 70 and likes a whisky. For the record, his favourite meal is cottage pie.

I knew that there had to be a silver bullet somewhere.