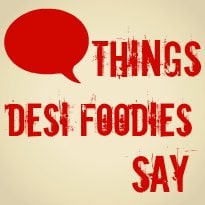 Twitter hashtags come and go, but when a rather amusing one trends on Twitter, you make an article out of it to share the laughs! This particular hashtag seemed vanilla without much flavour to it, but soon caught on like a house on fire, if that house was filled with meth - but in a good way. This hashtag was called 'Things Desi Foodies Say', and it seeped down and tickled every Indian foodie bone out there. Here are some tweets that let us peek into the wonderful cognizance of Indian foodies.

If at this point you're thinking - "that's great, but what on earth is this hashtag you speak of?" Here's help. This is how Twitter explains a hashtag -

The # symbol, called a hashtag, is used to mark keywords or topics in a Tweet. It was created organically by Twitter users as a way to categorize messages.

• People use the hashtag symbol # before a relevant keyword or phrase (no spaces) in their Tweet to categorize those Tweets and help them show more easily in Twitter Search.

• Clicking on a hashtagged word in any message shows you all other Tweets marked with that keyword.

• Hashtags can occur anywhere in the Tweet - at the beginning, middle, or end.

yaar, i wish it was more spicy #thingsdesifoodiessay

#ThingsDesiFoodiesSay this paneer steak is to die for.

#ThingsDesiFoodiesSay "I'll have my steak well done. With Tabasco on the side please"

#ThingsDesiFoodiesSay Let's go have meetha pan after this haan.

#ThingsDesiFoodiesSay One Veg Manchow Soup 1 by 2

#ThingsDesiFoodiesSay To the Domino's Pizza delivery: 'Please give more Oregano packets, ok?' (and then save them in a kitchen drawer).

Why are there so many vegetables in this dish? I barely see any chicken! #ThingsDesiFoodiesSay