Vegetarians more likely to think they are unhealthy, study finds 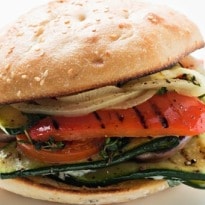 Vegetarians are more likely than meat-eaters to believe they are unhealthy, according to a new study.

Researchers at the Medical University of Graz who analysed interviews with more than 1,300 people found those with a meat-free diet were more likely to feel unhealthy and to think they had a poorer quality of life in terms of physical health, social relationships, and environmental factors.

Searching a database of 15,000 samples, researchers from the Institute for Social Medicine and Epidemiology compared hundreds of vegetarians in age, sex and social backgrounds with people who eat meat.

"The vegetarians have indicated that they have a worse subjective health condition, more health restrictions and increased allergies, and incidences of cancer and mental illness," epidemiologist and lead researcher Nathalie Burkert said.

While Burkert stressed that the limits of the study meant it would be impossible to conclude the cause and effect between a vegetarian diet and unhealthy living, the research team advised that further studies were "urgently needed" to determine this.

They also found that vegetarians had a lower body mass index and said they consumed less alcohol.

The findings suggested the more favourable diet was the so-called Mediterranean diet - high in fruit and vegetables and including moderate amounts of meat. Participants who kept that diet reported feeling more healthy and were found to suffer less frequently from chronic diseases.

"They had better health, and a better quality of life and fewer visits to the doctors," said Burkert.

The study used Austrian participants but researchers argued the findings are relevant for anybody thinking about their diet, and suggested that vegetarians could turn to substitutes if they were looking for healthier meat-free options.

Photo: Participants who had a Mediterranean diet reported feeling more healthy and were found to suffer less frequently from chronic diseases. Photograph: Alamy