Vegetarians Should Try Meat Substitutes at Their Own Risk! 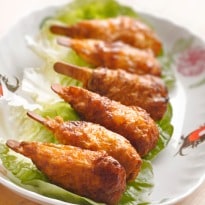 I distinctly remember the first time I tasted fake meat. The plate arrived with what looked like sausages - the shape was intact but the colour was a little pale. The taste was so revolting that I was happy to go back to being a meat eating carnivore with a vengeance. I swore never to show a preference for anything fake again. This vegetarian version of a sausage was crafted out of Seitan, a high protein food made of wheat gluten, that has a texture similar to chicken. Well, I chickened out of mock meats for many years after that.

One fine day, in the midst of an acute vegetarian phase that I was going through, I happen to chance upon a packet of Mock Duck at a fancy grocery store in the frozen foods section. This one was of Asian origin, it was also made from wheat gluten, aka Seitan. Time as we all know can fade away bad memories, so I decided to give this packet of fake duck a chance.


To begin with the pieces of duck looked a lot like a real duck and I learnt that wheat gluten is rolled out and pressed so that it has indentations that resemble a duck skin. Other ingredients on the packet said water, soy bean, oil, sugar and salt. That's what I suppose gave it the colour and flavour. I dare say, after a bit of trial and error, the mock duck grew on me. What emerged was a flavourful dish with a kind-of fibrous texture. It was not the real thing of course, but close enough.The trick was to add enough flavouring in the marinade for a few hours and what you ended up with was a sitting duck of a recipe. One huge setback with any kind of fake meat is that there is a uniformity in taste when it comes to all the meat pieces, sorry fake meat pieces. After all there's no chance of choosing a certain cut of meat or a part of the anatomy. On the other hand, there's no mess, no cutting and chopping off unwanted parts, the fake meat looks fake and makes no pretence.

The reason I was suddenly reminded of my tryst with vegetarian meats is what I read on my Twitter list the other day.  On Thanksgiving, I hear there is a bird that's been doing the rounds. Only this time, it's vegetarian. It's a mix of wheat gluten, tofu and canola oil. It's called a Tofurky. Apparently it's been around for the last 20 years, and one company alone has sold 3.4 million Tofurky Roasts since 1995. I think it's great that firstly it has a name. It adds a certain amount of respectability, an honour to the ingredient. Being called fake or meatless just doesn't have the same gravitas as a Tofurkey. (Which you shouldn't try and pronounce after a few drinks, it could go horribly wrong)

So while I have zilch experience with Torfukey and have never tasted the stuff, I am told by those who have experimented with it that once you add on the gravy and the stuffing, it transforms into an edible dish. Nawal Behal, a vegetarian who lives in Washington says, "I had used it about 10 years ago. At first the kids thought it was fun, but then the idea wore off. Since then the product have made a big improvement taste wise and nutrient wise. Tofurkey is a brand name made by Turtle brands but there are other companies that are competing now."

Torfukey
With a vast vegetarian population in India, it doesn't surprise me in the least that mock meats are catching up and are flying off the shelves from grocery stores. In case you want to experiment with fake meats, it's a good idea to know what goes into making them. Here are some common options.

Soya meat, made from soya beans.

Tempeh - A traditional food from Indonesia made from fermented soya. It contains many B vitamins, has a high protein content and is very versatile.

Quorn is made from a fermented fungus which is processed and textured to look like meat.

One question all mock meat eaters will ask at some point is - can mock meat compare with the real thing? Maybe not, and maybe many vegetarians just don't care, as they would rather not smell or eat anything resembles animal flesh.  Next question is whether mock meats are healthier, and while most people will tell you where's the doubt, there's no animal fat or cholesterol, mock meats  can end up with many preservatives and added flavours, as well as extra salt before they are packaged.

So this would be my checklist when it comes to opting for mock meats.

Ensure that they are GMO free. A lot of your soy protein meats could be genetically modified, which is a huge question mark on their health quotient.
Check the sodium levels. Like with processed packaged real meats, look out for excess salt that's usually added to compensate for the texture and taste of meat.
If there is a long list of ingredients on the label, then read them all. You don't want to consume hidden unwanted preservatives under the garb of a high protein meal.

Should all vegetarians give mock meat a try? Well, if you believe in what Michael Pollan says, which is never buy anything in the grocery store that your great grandmother doesn't recognise, you won't end up choosing mock meats, because they didn't exist back then. But will it be the future of food. Who knows?