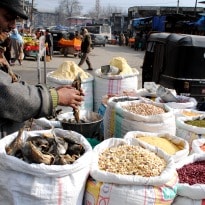 With schools and colleges closed because of vacations and icy winds hitting like spears and arrows, it is time to stay home and try the traditional grandmothers' recipes in Kashmir.

Traditionally, Kashmiris have used high-calorie foods to get the extra energy needed to brave the bone chilling cold of the winter months and if such energies come with relish and gusto in the form of mouth watering food, who can resist the temptation?

The 'shabdeg' (duck and turnip cooked in a sealed earthen vessel over a simmering fire) is so named because it is prepared during the 'shab', which means night in Urdu and Kashmiri.

A fat duck is selected and feathered carefully so that its skin remains intact. The duck is fried in mustard oil and then cooked for hours with home-grown turnips and a lavish doze of red chillies, turmeric, cardamom, fennel seeds and salt. The family gathers around the hearth as the grandmother or the mother carefully selects the right amount of spices that must go into the dish.

The next day, the serving of the Shabdeg with steaming rice is something of a ritual Kashmiri oldtimers still remember with nostalgia.

"It used to be an event children would always look forward to. With the dexterity of an artist, my mother's hands would move as if by instinct to add spices, charge the hearth with firewood, seal the earthen vessel with dough and ensure that the fire was just right to generate the flavor and the taste," Abdul Rehman, 82 of north Kashmir's Saloora village, told IANS.Another winter delicacy the locals have lomg relished is mutton cooked with dried brinjal and tomatoes.

"During the summer months, the ladies of the family would pick the best quality brinjal, pumpkins, turnips and tomatoes and dry them up carefully in sunlight to be stored for winter.

"Lean chops of lamb would be cooked with dried brinjal and tomatoes which would be served at dinner. The dish would be hot and spicy because of chillies, turmeric, fennel, salt and mustard oil," said Ghulam Nabi, president of the local chefs' (known as Wazas) association.

"Another winter delicacy was beans, turnip and mutton. Have it done properly today and I promise you will not be able to resist licking your fingers when the dish is finished", Ghulam Nabi told IANS.

Another dish relished in winter used to be a home-grown rooster cooked with dried pumpkins. Red chillies were generally avoided in this dish or used very sparingly.

The bird's feathers were carefully removed to avoid damaging the fat-rich skin. The rooster was then singed over a mild fire and fried lightly in mustard oil before cooking it with dried pumpkins and other spices.

The other winter dishes are dried fish or 'Hukhe Gad' and smoked fish or 'Farry Gad'.

Kashmiris traditionally stocked dried fish which were are caught during the summer months in the local rivers and lakes in which they abound.

Some of these fish were smoked after clearing their abdomens and then stored to be cooked during the winter months.

Since the locals have stopped the practice of doing it themselves, both dried and smoked fish are now available in markets during the winter months for those who still believe old is gold.

There is a common saying in the Valley that even the worst bad cold would be cured with a hot dish of 'Hokhe Gad' fried in mustard oil and cooked with red chilies and turmeric and served with a thick gravy.

Ghulam Nabi said only be the very rich who could afford to feast on the traditional Kashmiri Wazwan during the winter months and that is why the winter cuisine is essentially home-based and doesn't need a trained chef to cook.

"The marriage season is over by the winter. In addition to arranging a proper cooking shelter unaffected by rain and snow, if you intend to serve the Wazwan during the winter months you must have a large properly warmed-up dining place otherwise the spicy, oily and fatty Wazwan courses like the 'Tabak Maz' (lamb ribs fried in ghee) and others would freeze and become unpalatable.

Listen to the latest songs, only on JioSaavn.com
"It is because of this reason that only the rich and highly affluent families in Srinagar can afford Wazwan during the winter", Nabi said.

Economic affluence notwithstanding, the traditional grandmothers' recipes are something the future generations of Kashmiris would learn about only in history books unless they strive to preserve them and keep alive this legacy.